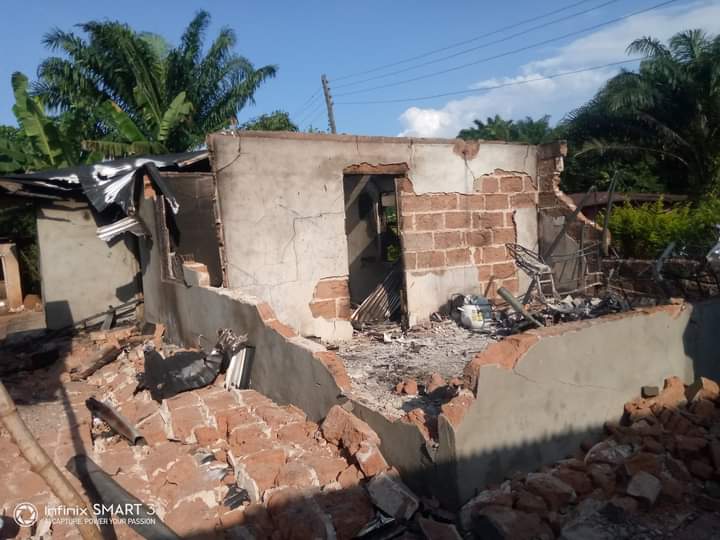 October 9, 2020 was a Black Friday at the family home of Isiza, a native of Central Community, Abavo kingdom, as their 67 years old widow daughter and mother of three children, Mrs. Josephine Isiza was murdered by unknown hoodlums, and her corpse set her ablaze together with her building.

Narrating the ugly incident to Ika Weekly Newspaper reporter, the daughter of the deceased; Vera Isiza, said, “Few minutes before the death of my mother, both of us spoke on the phone at about 8:49 pm. I called my mother to discuss some vital family issues with her, but with her response, I ended the call, because I sensed she might be very tired. Before I ended the call, she told me that she would come to our family house along Deeper Life Road in Boji-Boji, where I reside with my other siblings.

“But, after about 30 minutes, my instinct told me to call her again, so that I could tell her what I wanted both of us to discuss the following morning. Then I put a call across to her for the second time. Immediately she picked the call, what I started hearing was her screaming for help. I tried all I could to reach out to my relations at Abavo for them to go to our family house to see what was wrong with her, but, all efforts to reach them proved abortive. It was the next morning that we found my mother’s burnt corpse and the razed building.” she said.

Continuing, she stated that during the lockdown in April, two boys attempted to kill her mother, attacking her in the same house early in the morning. But both of them were apprehended by the community vigilante.

While praying her mother’s gentle soul to rest in peace in the bosom of the Almighty God, Vera appealed to the Police to help carry out investigation that can lead to the arrest of the hoodlums.

As at the time of filing this report, the remains of Mrs. Josephine Isiza had been laid to rest at her family compound.