Breaking News
Home - EDITORIAL - A PEEP INTO THE BASKET OF BILLS, MOTIONS OF FESTUS OKOH

A PEEP INTO THE BASKET OF BILLS, MOTIONS OF FESTUS OKOH

As a background, in the ancient Roman religion and myth, Janus is the god of beginnings, gates, transitions, time, duality, doorways, passages, and endings. He is usually depicted as having two faces, since he looks to the future and to the past.   Some scholars regard Janus as the god of all beginnings and believe that his association with doorways is derivative. From this believe, came leadership goal setting at the beginning and evaluation at the end or periodic moments.

While the tradition of looking into the future via goal setting helps public office holders to chart their course in public leadership, periodic evaluation of such goals against results helps to accurately stir the ship of administration.

We need to keep this historical root in mind in other to understand more fully why the nation Nigeria on Friday 12th June, 2020, celebrated Democracy Day across the country, where public office holders in the country were placed under serious scrutiny by their constituents.

And at a glance, Honourable Okoh’s harvest of Bills /motions sends one message-it is a record of performance.

The truth they say, speaks for itself. 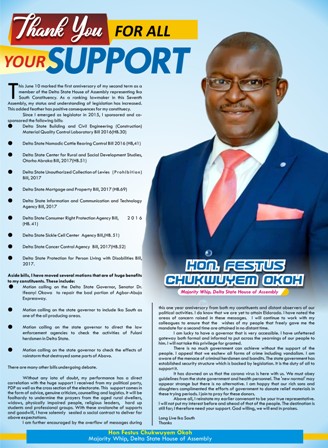 While Ika Weekly Newspaper commends Honourable Festus Okoh for this superlative performance and remarkable feat, we must underline specially that his actions in the past five years has opened doors of democratic expression and engagement while making democratic relationship between the government and the governed participatory.

Above all, his humility in the Newspaper’s views is worth commending, his people-purposed representation is filled with ingrain lessons for the youths aspiring for leadership positions. Essentially, Okoh has demonstrated that it takes time and effort for leaders to gain full appreciation of their follower’s strengths and weaknesses. The Honourable is reputed for spending a good deal of time outside the office walking around, watching, listening, and taking mental notes of the challenges confronting the governed and what each person struggles with. There is in our understanding, no substitute for this kind of leadership style.

However, without going into specifics, concepts, provisions and definitions, it is important to state that these achievements are not without their pitfalls particularly when they fail to serve their purpose. Experience has shown that when laws are made without implementation/execution, such laws become mere academic exercise.

Without any shadow of the doubt, the remaining 3 years will be critical and will act as watershed to defining his success or otherwise in the house. The state needs more laws with human face; laws that will uplift the life chances of Deltans.

As the management of Ika Weekly Newspaper and of course the good people of Ika South Local Government Area celebrates Honourable Festus Okoh, it is germane to draw his attention to another fact.  Before his emergence as the Honourable Member of the Delta State House of Assembly, many laws have been enacted and signed to law. Yet, the challenges they were made to address remained. This is the sad narrative of the moment. The situation says something else. It is not about sponsorship of Bills but demands liaising with the executive to ensure enforcement of such laws.

While the publisher, members of the Editorial Board and entire staff of the Ika Weekly Newspapers, again felicitate with Honourable Festus Okoh, the ranking lawmaker for this noble feat so far achieved, as part of our editorial policy, we are compelled to leave him with this thought provoking question; If it is his wish that this celebration continues till 2023, then, the people expect from him laws that are not only enforceable but promote social justice as well as social mobility.

0Shares
0 0
Share
Previous WHILE PLANNING FOR WEDDING, PREPARE FOR MARRIAGE
Next I AM ALIVE, HALE AND HEARTY, Says Pa Arthur Okowa