ABBA KYARI, AND THE LESSONS LEFT BEHIND

EDITORIAL: LETTER TO OKOWA ON HIS 5TH YEAR IN OFFICE

MANY THINGS ARE WRONG WITH NIGERIAN NATION, Nwaghodoh

Aside from the sad feelings that greeted the sudden demise of General Sani Abacha on the 8th of June, 1998, and that of President Umuru Yaradua on the 5th of May, 2010, the Friday, April 17, 2020, this episode remains one of the lowest moments both in the annals of national existence and in the mental archives of the nation’s keen political watchers. similar episode is the death of Abba Kyari.

The reasons are evident.

On that day, at that time and in that place, Abba Kyari the Chief of Staff of Nigeria’s president and one of the most powerful men in the country, died in a cardiology hospital in Lagos.  Abba Kyari was said to be 67. The cause according to media reports was complications of the new coronavirus. Definitely not a democratically elected President, but with his departure, the nation’s effort to build a more human and humane country may suffer setbacks.

To understand this position more fully, Abba Kyari was a banker, lawyer and journalist and a corporate/private sector player before he went into politics, Mr. Abba Kyari was from Borno state in Nigeria’s northeast. He studied sociology and law in the United Kingdom, where he attended Warwick and Cambridge universities.

By contrast, unlike his predecessors, a critical analysis will reveal that he possessed the ability to understand and make informed judgment about governance in ways profitable to the nation; he accelerated government decision making process. Before assuming the position, he was corporately and socially shaped in particular ways beyond influence by the powerful commercial, governmental and security interests that have for a very long time directed and determined the nation’s basic leadership architecture. And most importantly, going by commentaries, he functioned in ways that protected the rights and opportunities of the present government and contributed to compatible development approaches.

see also: NIGERIA AND THE PATHWAY TO GENUINE PEACE &#8211; UTOMI

President Muhammadu Buhari’s declaration on  Monday, August 19, 2019 at the retreat for the ministers that; anyone who wants to see him, including ministers and Nigeria’s influential state governors, had to go through him, supports the claim on Abba’s efficiency and possession of good judgment.

However, despite his virtues and attributes, it is important from these stories to underline also that Kyari was not a perfect man. ‘He made his shares of mistakes and disappointed his shares of people in his life time’. He was not an infallible personality, he was ladened with shortcomings. We need to keep these in mind as we think about the broader failures we have not paid attention to as a people.

Separate from the fact that humans are advised not to speak ill about the dead, instead of allowing loopsided commentaries about his life to distract us in our journey to nation building, it will be more rewarding in social and economic terms if Nigerians use this sober moment to study his actions, to see how he conducted himself and to discover the reasons for his victories or defeats so that they can avoid the later and imitate the former.

In this sense, the first lesson to draw by all is that ‘there is an amazing democracy about death. ‘It is not aristocracy for some of the people, but a democracy for all of the people. Kings die and beggars die; rich men die and poor men die; old people and young people die; death comes to the innocent and it comes to the guilty death is an irreducible common denominator of all men”.

Secondly, it is also important to underline that even his age — 67, according to the president, who knew  for four decades — was subject of much speculation. Little was known about his age and date of birth.

This state of affairs according to reports led many media outlets to estimate his age, putting it at between 60s and 70s, and even 80s. Take as an illustration, while PREMIUM TIMES indicated in its first reporting of his death that Mr. Kyari’s age was unknown. Reuters said he was in his 70s. Some local broadcast stations like the AIT said Mr. Kyari was born in 1938, an estimate that echoed the Wikipedia’s entry that said he was 81.

Indeed, Abba Kyari is gone and we pray God to rest his soul, but it will not in anyways be characterized as an overstatement to describe the   ambiguities and incongruities surrounding his age as an unwelcome departure from normal good and judgment of an elder statesman of his class. In fact, It exposed the root of our national malady which goes deep into the venality and incompetence of successive administrations to manage personal data of her citizens.

With this present development, it is simply no longer possible to ignore such strangeness from the nation’s political office holders and other civil servants. Definitely, this is quite convincing and it’s a general feeling that something has fundamentally gone wrong with the nation’s information management system.

In one way or the other, the entire nation is in this together, yet this collaboration is patently traceable to political office holders. The accuracy of data submitted by those elected or appointed into public offices no longer matters. Their policy directions are essentially common.  In-accuracies of data and personal information have become a governing liturgy and a common prayer of invocation-not minding the political party, position or creed.

The stunning thing is that this happened at a time when nations across the globe are redoubling their efforts in such a manner that will promote both accurate and efficient information management system in their countries to help curb corruption and criminality. 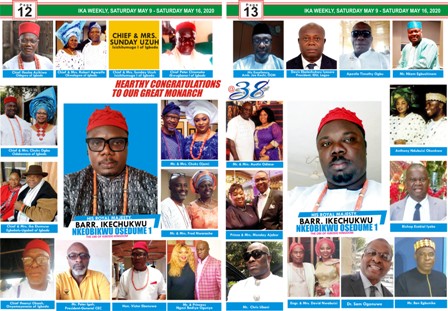 The present crop of leaders must draw a lesson from this embarrassment, just as the situation calls for urgent overhauling/quickening of the National Identity management process.

In the same style, the reported claim that the press statements announcing Abba Kyari appointment in 2015 and his reappointment in 2019 did not also indicate his date of birth or age cannot be described as a very good scorecard on the part of the government’s media/information managers.

With this revelation, Nigerians are now convinced that there are countless numbers of reasons why Media Assistants position in most public offices appear both unnecessary and unproductive. But, perhaps, understandably, the major one centres on the fact that communication from public officials/offices are ‘self-undermining and often always reputed for encouraging complacency as constituents  perceive issues raised by the government as already being handled or the priority often always not in conformity with the will/opinion of the people.

If an effort is dedicated to understanding the basic reasons why the existing system is currently accepted and its fundamental assumptions not challenged? More critical questions will emerge.

For instance, are the media Assistants in the first place aware that; every decision they make while discharging their responsibility require value judgment? Are they truly aware that different decisions bring different results; that all decisions have consequences that are direct and indirect, intended and unintended, short term and long term?

Are they conscious that their decisions affect others; that those decisions may influence thousands of people’s opinions on a political issue? Do the Media Assistants have the philosophy to challenge the nation’s political and economic logic, and capacity to pursue the theory of governance in order to effectively inform their principals?

Finding answers to these questions will have far-reaching implications on both the public officials and the entire Nigerians. As it is laced with the capacity to compel public office holders, engineer socioeconomic prosperity that will be people-purposed while propelling the masses to work together for the greater good.

All these leads to a final observation/lesson- the movement of his body from Lagos to Abuja on Saturday morning and subsequently interred at the military cemetery in the Gudu neighbourhood of the city.  An event were senior government officials were reportedly present at the burial. And were roundly criticized by medical officials  and Nigerians of course for doing so and for not practicing social distancing, an action considered a breach of  the Nigeria Center for Disease Control (NCDC) protocol.

Although members of the Presidential Task Force on COVID-19 have since expressed regret, saying that lessons had been learnt, the whole saga in my views remains a pain deepened by the awareness that it was avoidable.

If this line of reasoning is correct, it will necessitate the posers as to; who will in future, stop these government officials that cannot apply the virtue of moderation and sincerity? And who should be the judge? Or must we as a nation allow the useful and the useless like good and evil go on together allowing our nation to reap whatever fruit that comes to us in the nearest future?

As the nation continues to pray for the happy repose of Abba Kyari, what this all means is that, today and every day, Nigerians have a responsibility to remember what happened on this day and allow its lessons to guide them.

‘I have nothing new to teach the world. Truth and non-violence are as old as …