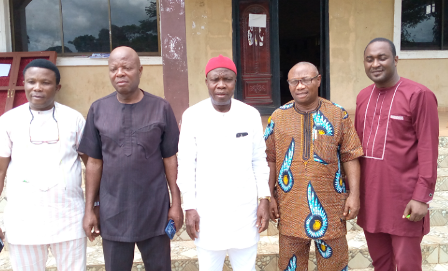 Agbor Community Union, (ACU), the apex umbrella body for Agbor people has lent its voice to the ongoing battle between the Dein of the Agbor Kingdom His Royal Majesty Benjamin Ikenchuku Keagborekuzi 1, and other monarchs in Delta State, as the group appeal to all parties to sheath their swords.

Recall that the Dein of Agbor kingdom in an interview said that he and the Olu of Warri are the only first-class monarchs in Delta State and that generated a lot of heat leading to the other monarchs in the state making public statements and joining issues with the Agbor monarch. They in their statement maintained that according to Delta State law all traditional rulers are co-equals.

Speaking on behalf of Agbor Community Union in a press briefing, the President General of Agbor  Community Union Mr. Larry Onyeche stated that the matter was supposed to be something the traditional rulers ought to have handled in their meeting and not to make a public statement on it.

According to Mr. Onyeche, the public statement from the traditional ruler’s council has caused embarrassment for the government, because, people were not aware that the tenure of the Chairman of the Delta State Traditional rulers council has expired for long and yet a new person has not been elected into the position. He maintained that assuming the other traditional rulers did not make the public statement nobody would have known, talkless of the issue becoming a topic for public deliberation.

In his words, “The statement made by the Dein of Agbor is a historical fact and he was not referring to anybody, in particular, this is what the traditional rulers as elders and custodians should have deliberated on in their meeting and not make public furor over it. The statement accredited to the Agbor monarch is historical facts and figures, right from the Midwest region to Bendel state up to date.”

He thanked Agbor indigenes for the support to their monarch during this period, while he appealed to them to continue to support their king so that more development and prosperity would come to the land.

Speaking further, he appreciated sons and daughters of the land who have contributed to the welfare of the kingdom and prayed that God Almighty will continue to protect them and enlarge their coast.