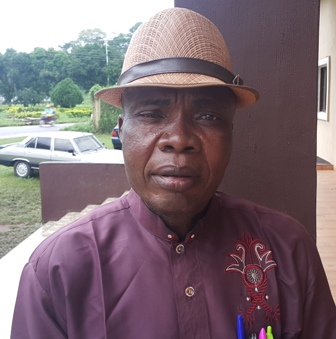 IMr. Lawrence Egun Onyeche, popularly known as Larry Onyeche, President-General, Agbor Community Union (ACU) the umbrella body for all Agbor people, worldwide has in a press conference held on Wednesday, September 23, 2020, reiterated the place of ACU, the Agbor apex body, as the sole mouthpiece of all Agbor sons and daughters at home and in the Diaspora.

In this all inclusive press interview, Mr. Onyeche also spoke at length on several important, as well as salient issues that border on the integrity and progress of the great ancient Agbor Kingdom in contemporary times.

The Agbor Community Union  President-General also gave an account of the achievement of his administration since its inception in 2016.

Our achievements are enormous. During our first tenure, we were able to maintain peace in the community.

Secondly we were also able to bring in the Agbor Police Area Command and through one of our sons who volunteered to facilitate it by donating three Hilux vehicles.

We toured all the communities, soliciting for their cooperation

Also, unlike the first tenure when we had just two Vice-Chairmen, we now have one Deputy President-General and five Zonal Vice President-Generals and this structure makes administration easier, tickling down to everybody in the respective communities

In addition to our achievements is the Agbor Community Hall, which when we took over had no ceiling and was not plastered, but today, the hall has been completed with tiles, ceilings, paintings electrical and so on.

Two persons were also employed for the day to day upkeep of the hall and the Secretariat.

Employment wise, we have been able to link our children to various job opportunities and where they are qualified, they were employed.

Next is the hosting of the Ogwa Ika, which had not been done for years; we blazed the trail and no community has been able to surpass that of Agbor Kingdom.

His Majesty auspiciously graced the occasion along with Delta State Governor Senator, Dr. Ifeanyi Okowa with the other 10 Traditional rulers in Ika Federal Constituency.

ACU AND THE PALACE

The relationship between the Agbor Community Union and the King; HRM Dr. Benjamin Ikenchuku, Dein of Agbor has been very cordial.

In respect of the rainstorm that damaged part of the Edike Temporary market, the Dein of Agbor Kingdom visited for on-the-spot assessment of the incident, which was very much in place, being our father and the custodian of the culture and tradition of the people and his concern for the well being of his subjects.  ACU Executives and the Works Committee equally visited there for first hand assessment of what happened in the Market. During the visit, the Council Chairman gave the reasons that led to the collapse of those two stores, stressing that they were still under construction.

As for the CTC market project, the Council Chairman said that he wants to make a replica of what our sister Local Government Council Chairman is doing, even though they are yet to sign the contract for the project, as the proposal is still being studied. I strongly advise that whatever project that is to be done should be done well with the interest of the people in mind and not to aggravate the suffering of the people

First and foremost, we want peace and infrastructural development in Agbor as well as for our cultural festivals to be celebrated, which His Majesty has assured us.

The next one now is Iwa -igi festival which has been slated for 4th October, 2020. The essence of the Iwa-igi festival which is one of the important festivals in Agbor kingdom is to thank God for the bountiful harvest of our yams and other farm produce.

However, on behalf of His Royal Majesty, we also using this medium to invite all Sons and Daughters as well as Agbor groups and Associations and friends to attend the Ceremony .

Those in Diaspora should also make their presence felt and join hands with our king to ensure that we celebrate our festivals. Even as appeals are being made for all Ndi Agbor to be united, thanks should be rendered to God for the much that has been done so far.

The five Zonal VICE Presidents-General created have been created to enhance the activities of Agbor Community Union, mostly in the dissemination of information to the grassroot.

On the issue of the naming of the Agbor Railway Station, the railway project started 30 years ago and the Federal Government Gazette still has it as, Railway Station, Agbor and I do not see the need for squabbles on the name issue, instead, we should all work as a team. When it comes to Ika, Agbor has been the head all along.

We should all speak as one. Requesting for change of name from Abuja seems to give the impression that we are quarreling and this is making mockery of the whole thing, I am therefore pleading with our sister Communities to focus on how we can develop Ika.

The Army Barrack is still in Agbor. Land has been allotted to the State Government for that purpose at Alifikede/Omumu/Obiolihe/Ihogbe axis along Old Agbor-Benin Expressway and it has been surveyed.

THE POSITION OF PRESIDENT-GENERAL

The task of being the President-General has been very enormous. Our tenure has made the position of a President-General of Agbor Community Union to be well respected, and competitive, going by the toughness of the last election. Before our tenure, people were literarily begged to be President-General. Now, more people are interested even when there is no financial remuneration

Our brothers and sisters and children in the Diaspora have been very helpful, cooperating with Agbor Community Union in the developmental stride of Agbor kingdom. I am in touch with most of them. I am using this opportunity to appreciate and thank them and to solicit for more of their cooperation with ACU.

In my position as PG, I have assisted some of our qualified children to have job opportunities. This process is still on-going.

From time, Agbor had been a language, Ika has never been our language. Ika is a geographical area (Federal Constituency) comprising of people that speak almost the same dialect as different parts of Ika speak their own dialect, for example, Umunede, Akumazi, Owa, Abavo, Igbodo and others speak their own respective dialect. Ika is therefore just a geographical location not a language. Ika cannot be spoken because it is a conglomeration of 11 kingdoms with about 145 Communities.

You cannot be said to be speaking Ika; it is an aberration, but one can say I am from Ika Federal Constituency like. Advisedly, the people in Ika should be identified by their languages; such as Agbor, Umunede, Owa, Otolokpo and so on.

POLITICAL SYNERGY AND UNITY OF AGBOR

They wanted to drag ACU into politics, which we resisted. It is high time that there is a rallying political point in Agbor.  Secondly, the politicians among us are not helping matters. That was why we advised and enabled the Agbor Political Forum (APF) whereby all the political parties would condense into a forum where they decide those to vie for political positions.

Soon, Agbor Community Union shall convene a meeting with all Agbor Political office holders to give account of their activities.

THE ROLE OF A PRESIDENT-GENERAL

We have 11 Presidents-General in Ika, 91 PGs in Anioma and 165 PGs in Delta State as a whole and we have a forum where we meet. Clearly, President-Generals are not political persons. We are purely for the cultural and infrastructural development of our State. In short, State Government has created an office that oversees the activities of the PGs in the State which is in the Rural Community Development Office. Ours is to disseminate information that promotes cultural and infrastructural development of our communities

As at last year, we were able to constitute a committee for the celebration of Agbor Day, and they interfaced with HRM and he supported that Agbor Day should be marked this year, October, during the Iwa gi celebration unfortunately, the COVID-19 lockdown affected it .The king also agreed that the Osiezi festival will be celebrated in the year 2022, all things being equal. Osiezi entails a lot of things to be done and the necessary planning has to be made.

The installation of Chiefs is firstly, purely at the prerogative of the king. Secondly, it is based on the performance and achievement of the persons to be made chiefs, thirdly their impact on the community.  So far, the king has appointed and is still going to appoint more chiefs.

All we are advising is that these chiefs should be well profiled.

We are using the opportunity to appeal to both the old and new chiefs to join hands with the king to move Agbor forward, in terms of development, culture and otherwise. We should also learn to speak with one voice.

I               n addition, those chiefs who are outside Agbor or are in the Diaspora should please make haste to come back home to take their titles and help move Agbor forward, because they are very vital.

The government has outlawed it. The State Government has made a policy on it and most communities are adhering to this policy.

The ACU is functional with two employees, a messenger who also doubles as a labourer, and a Secretary. We have a letter box for correspondence from anybody who has complaints, observation or information placed in the Secretariat office at the ACU conference centre Ime-Obi.

A WORD FOR THE FOUNDING FATHERS OF ACU

The ACU has been in existence for the past 45 years. We want to appreciate the founding fathers, most especially as we are building on the foundation they had laid. Indeed, we really appreciate them.

My final word is that we all need is peace and we should be patient with one another at all time. We should as much as possible reduce the acts of going to the Press to express our grievances. Instead, let us all come together at all time and if the need be, go to the palace to table our complaints.

Everyone is even free to come to ACU for a chat.

Let us learn to work together, listen to one another and see how we can move Agbor forward. This becomes necessary because where there is no peace, there cannot be development.

I thank our Governor, Senator (Dr.) Ifeanyi Okowa, the Road Master for his good works, while still asking for more