The Agbor Gha-Ihun Security on Thursday, March 18, 2021 paraded one Matthew Ifenchor from Alisimie, Agbor in Ika South Local Government Area for illegal possession of locally made pistol and attempted murder.

Speaking to newsmen, Ifenchor confessed that the locally made pistol was handed over to him by his Aye cult group for self defense as their number 1. He said he has only used the gun to threaten a member of their cult group, Fidelis Etuokwu for querying his emergence as the number 1 of their cult, who thereafter reported him to Agbor Gha-Ihun Security that later came after him for arrest. 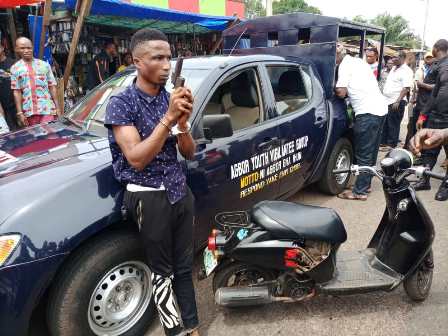 According to him, “Etuokwu has accused me of going after him with a gun to kill him, which can never be possible for the fact that we are Aye brothers. If I have the intention to kill him, I would have shot at him and not his motorcycle. We do not kill our Aye cult brothers”, he claimed. 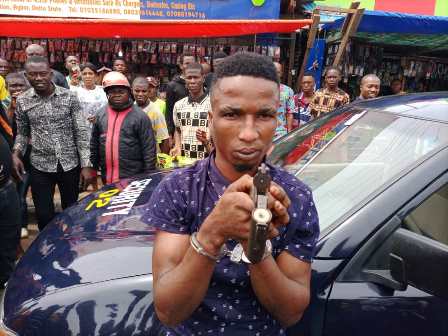 Meanwhile, Felix Etuokwu debunked ever being neither a member of Aye cult group nor any other cult group, saying that he does not know why Ifenchor confronted him to the extent of wanting to kill him with a gun. 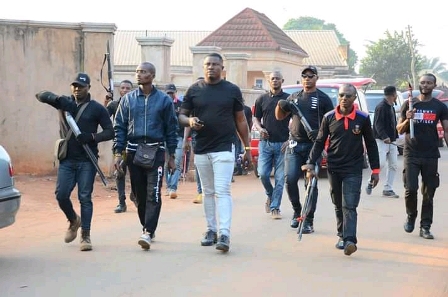 Etuokwu concluded saying that he had no issue with Ifenchor despite having come across him like every other person.

The reception which was chaired by Gen. Ihejirika (rtd) was well attended by national dignitaries. The SSG of Delta State, Chiedu Ebie as well as the Honorable Senator representing Delta North, Sen. Peter Nwaoboshi were also present among many serving and Retired Army Generals and many others.

The President General of Agbor Community Union (ACU) was given the honour of saying the opening prayers in Agbor language at the colourful ceremony.

The PG of ACU personally extended the joy and good wishes of His Royal Majesty, Dr Benjamin Ikenchuku, Keagboekuzi 1, Dein of Agbor Kingdom and the good people of Agbor Community worldwide to their Son and brother, General LEO Irabor.

He then wished him God’s wisdom, good health and Success in the execution of the  onerous task.

Share
Previous PLEASE, LET US LISTEN TO EDWIN CLARK WRITTEN BY OMILO
Next GUIDELINES FOR REOPENING OF PRIVATE LESSON CENTRES; WHY DTSG DESERVES OUR PRAISE