The revamping of the once moribund Agbor Technical College, in Ika South Local Government Area of Delta State by the Senator Ifeanyi Okowa-led administration, has continued to attract applause and commendation from critical stakeholders and residents of the area.
Some of those who spoke during a visit by some journalists to the school to ascertain the level of work done in the school said Governor Okowa should be commended for taking proactive step to revive technical education in the state. 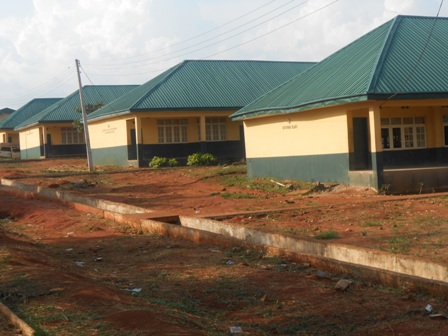 According to a former Peoples Democratic Party, PDP, State Youth Leader, Mr. Jude Onya, the governor has demonstrated the seriousness his administration attaches to education, especially technical education and skill acquisation, and his love for the good people of Ika South, by upgrading facilities at the school.
He noted that outside the educational benefit to the students, the school would equally enhance socio economic activities in the area, adding that everybody stands to benefit when activities take off in the school.

Mr. Onya, who was also a member of the Governing Council of College of Physical Education, Mosogar, expressed satisfaction with the quality and level of work done in the school, and commended the contractor for doing a good job.

While describing Governor Okowa as an intelligent and focused leader, the PDP chieftain maintained that the governor, inspite of the prevailing economic situation in the country, was able to embark on such important project that would in the long run create job opportunities for youths in the state.
“If the governor could revamp three technical colleges, including the Agbor Technical College, which was comatose for over 15years, within the short period of four months, and with limited resources, it clearly shows he would do more for the state as the economy improves” he stated.
Speaking in the same vein, a retired custom officer and PDP chieftain in the area, Capt. Peter Idion, said the resuscitation of the school was a positive and welcome development which has brought so much joy to the people of Ika South.

He disclosed that before the emergence of Senator Ifeanyi Okowa as Governor the people of Ika South had lost hope of the school ever receiving attention from the state government, stressing that the institution was not only important to the state, but the entire country.

He maintained that the benefits of bringing back technical education cannot be quantified, saying the school would help in pushing the state government’s job and wealth creation agenda.
“We can recall that this was part of what boosted Governor Samuel Ogbemudia’s government in the then Bendel State. We are hopeful that many of our unemployed youths would embrace the concept of technical education and avail themselves of this wonderful opportunity being presented to them by Governor Okowa to get them off the street. The ongoing skill acquisition across the state is a testimony to this,” he stated.

Mr. Idion used the opportunity to call on the opposition group to join hands with Governor Okowa to take Delta State to the next level of development and prosperity.
For the immediate past Ika South Local Government Area PDP Chairman, Hon. Ralph Azeh, the people of Ika South are overwhelmed with joy, especially the fact that the school was left to rot for over 15 years.
According to him, “Our people had lost hope the school would ever be functional again, but to our utmost surprise, just few weeks after assuming office as governor of Delta State, Senator Ifeanyi Okowa, awarded contract for the revamping and upgrading of facilities in three technical colleges in the state, with that of Agbor as one of them. We are indeed grateful to him for this wonderful gesture.”

The immediate past leader of Ika South Legislative Arm, Hon. Sunny Iyeke, who spoke in the same vein applauded the State Governor, Senator Ifeanyi Okowa, for making technical education one of the priorities of his administration.

He noted that, “this is the first time our people are witnessing the execution of a project of this magnitude. It is indeed an unprecedented development not only in Ika South, but Delta State at large.
“Our dear governor, within the first five months of his tenure, was able to execute such a gigantic, magnificent and landmark project. For this, the people of Ika South are grateful. We will continue to support and pray for him to succeed,” he stated.
In his contribution, Mr. Ifeanyichukwu Apakwueze aka Nweze, a businessman, said, “when I got to Agbor Technical College, the place was looking very beautiful with quality works on all the structures in the school, infact if I have the opportunity of meeting with His Excellency Dr. Ifeanyi Okowa, I will personally thank and appreciate him for the good work, because the college is my Alma mater, I finished from the school in 1985.
When we were in the college then, the place looked so ugly and abandoned, it even discouraged some of us from completing our programmes. But when I got there recently I discovered that the school is wearing a good quality look which most of the universities in our country today are not privileged to have. So, I am using this medium to thank him for this laudable achievement and other projects that he has been giving to several communities across the state; indeed the governor is working and we all need to encourage him and support him always in our daily prayers, because right from time he has been a man who has been making positive impacts through his SMART Agenda programmes. Again if not that God has always been with him he wouldn’t have been able to climb the ladder from the position of a local government Chairman to the state governor that he is today. Having worked closely with the governor, I discovered that he is a man that is not greedy, he loves sharing whatever he has with people, a selfless leader and a great inspiration to the younger generation, who delights in empowering the youths”.
Speaking further, he noted that all those who are saying that the governor is not working are the greedy people who felt they must be given one political appointment or the other by the governor. He encouraged all Ika sons and daughters to rally around the governor to achieve his second term ambition assuring them that they will benefit more of the dividends of democracy once this is achieved based on the track records of the governor Senator Dr. Ifeanyi Okowa.
Mr. Solomon Chuks Asiwe, a trader who deals on building material, said, “In the first place we have to thank the Almighty God for the gift of the governorship which he has given to Ika land because Ika land is one of the beneficiaries of the benevolence of His Excellency the governor, actually since he assumed office he has been doing excellently well”.
Speaking on the renovation work of the Agbor Technical College, he stated that, “there is a church behind the college, St. Matthew Catholic Church, which I attend and formerly we used to pass through a short cut by Agbor Technical College because of the bad portion of the Uromi road but with the renovation work in the school and adequate fencing of the College, we no longer use the school compound as short cuts again.
“Indeed I have to give kudos to our amiable governor for the good work he did at Agbor Technical College. I am encouraging us all to vote for our governor for second tenure even if you have not benefited anything from his government you should exercise patience hoping that you will benefit a lot from him during his second tenure; knowing that it is not easy.”
Mr. Vincent Ikechukwu, an engine operator, stated that the administration of His Excellency Senator Dr. Ifeanyi Okowa, is very good, though some persons are of the view that the governor is not working, I was in port Harcourt when I got the negative remarks about the governor but when I came back here to Delta State I discovered that even what I went to look for in Port Harcourt, was more in my own area here, then I became convinced that all those saying that the governor is not working are just being jealous of his achievements. My prayer is that God should strengthen him and grant him more courage and wisdom, much as I also encourage the governor not to listen to detractors.
The renovation of Agbor Technical College is very beautiful, it wasn’t so when I left Delta State for Port Harcourt few years ago, so when I came back the place was wearing a new look then I got more convinced that governor Dr. Ifeanyi Okowa is really working. I urge all Deltans to support the governor in order to actualize his second term ambition.
Mr. Bointa Julius, from PDP ward 9, “Speaking on the performances of His Excellency Senator Dr. Ifeanyi Okowa, in my candid opinion, the man is doing well, the only problem is that the money from federal allocation is not coming as before, that is why some persons feel that he is not working; but to me, he is doing very well.
The renovation work on the Agbor Technical College is a history because such quality work on the technical colleges in the entire state has never happened before.
Based on this positive development and other viable projects which this administration has put in place in several communities of Delta State, we are urging Deltans to return His Excellency for second tenure in 2019, we appealing to them much as we believe that it must happen.