The nights of Thursday 16 and Friday 17 January, 2020 were indeed nights of liberation, miracles and testimonies for Abavo people in Ika South Local Government Area as the founder, Wind of Change Deliverance Ministry with headquarters in Agbor, Apostle Chuks Elisha Okenye, and a Catholic priest of the Issele-Uku Diocese, and Founder of Lumen Christi Adoration Ministry, Rev. Fr. David-Mario Dibie stormed the land for crusade tagged, “No More Tears”. 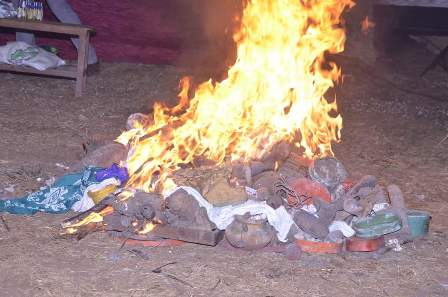 The two day power packed crusade saw many Abavo people who were worshiping idols giving their lives to God and surrendering their idols before the great men of God for destruction. Also, a popular native doctor in Abavo named Idahosa Sunday, also known as Thunder gave his life to God during the programme. 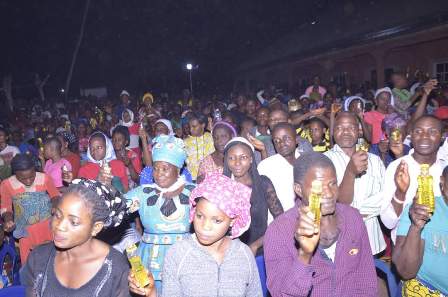 Addressing newsmen, Apostle Okenye who is popularly known as Baba Fire gave thanks to God Almighty for the success of the crusade. According to him, “Abavo is my homeland. The crusade is annual to win souls for Christ and bless my people for a New Year. Indeed, I was highly impressed over the large turnout recorded. This year’s crusade turned out to be different having the presence of the great man of God, Rev. Fr. David-Mario Dibie as the guest preacher. It is liberation crusade with the theme, ‘No More tears’. Those who attended the crusade would attest to the fact that we achieved our aim of liberating the land of Abavo as many surrendered their lives to Christ and their idols destroyed. Before this time, many of my people have continued to complain of hardship and retrogression. But since we held this programme of libration, 2020 will mark a year of new dawn for Abavo people both at home and in Diaspora”. 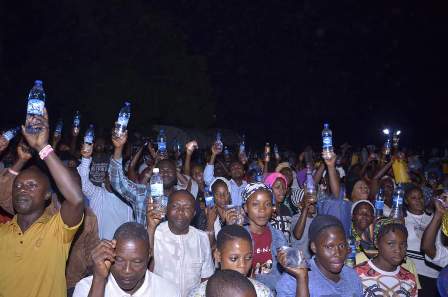 The man of God in a special way appreciated Rev. Fr. Dibie for honouring them with his presence irrespective of his busy schedule. He further disclosed that this year’s crusade was partnered by the Idumu-Ugbo youths of Abavo in Agbor who also suggested that Rev. Fr. Mario Dibie be invited.

While describing Rev. Fr. Dibie as a humble priest, Apostle Okenye said, “even though I have been hearing about him, I felt he was a big man of God that I wouldn’t be able to meet because of security and protocol, but surprisingly the first day I went to see him in his office, there was no security and protocol”. He said Rev. Fr. Dibie ‘s humility made him become closer to him that he now attends some of his programmes, explaining further that their closeness shows that they are one big family as Christians.

READ ALSO: MANY POLITICIANS WILL BE IMPRISONED &#8211; Baba Fire

“Rev. Fr. Dibie did not give procedure or a list of his requirements to attend the crusade unlike some other clergymen who will send their Personal Assistant (PA) to speak with you. But what he did was to choose a date free for him and demanded that there should a good sound system and lighting facilities. Sincerely, he is a man worthy to be celebrated. I am happy partnering with him and it is my prayer that God will continue to uplift him”, he added.

Continuing, Apostle Okenye who said there is no segregation in Christianity recalled that when the billboard for the programme came out that he received several phone calls from people questioning him when he became a Catholic priest that he has to invite Rev. Fr. Dibie to his programme. He then called for more unity in Christianity in Ika nation, also enjoining the people to learn to value their people as Governor, clergymen and whatsoever position they are occupying for the progress and good of Ika nation.

THERE WILL BE GREAT CONFLICT IN IKA LAND OVER HOUSE OF REPRESENTATIVE POSITION &#8211; Baba Fire

He concluded by congratulating Abavo people for the success of the crusade, urging those who were born again to begin any church of choice and be closer to God by studying of the bible and prayers.