As the 2019 general election draws near with more aspirants indicating interest to run for various elective positions within and outside the State, Barr. Felix Morka, an APC chieftain in Ika South, has joined the race for who becomes the next governor of Delta State. 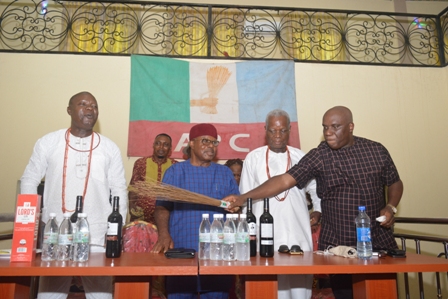 He made this known during a meeting conveyed in Agbor to officially declare his intention on Wednesday 2nd May 2018.

Declaring his interest before leaders of the APC in the Local Government, Barr. Felix Morka, said himself, General Nick Agbogun, Chief Sonny Anumele and others, were part of the thinking process that birthed APC, having been members of the ACN   dating back to 2010.

He said he chose to forgo the joy and pleasure of working at the International level to come home to his people and render services to them back in 2010, before the emergence of APC in 2014.

He said APC Ika South is a flag ship chapter of the party due to their ability to act differently, document and keep records.  He reported that he joined the party because he saw an avenue to be an upright citizen of Nigeria.

He opined that the primary function of the government is to help the common man, stating that governance in the State has not only failed, but those who are in government  celebrate the failure of the government, taunting the poor masses.

“Government in Delta has not only failed, but those in government celebrate the failure of the government, when they taunt the poor and remind them of their poverties daily,  they create conditions that enslave their own people when they are supposed to help the people. The season has come when those who govern or seek political offices remember that the constitution says that we the people must vote to give power, they remember now, when 18 months ago they did not care, but in a short while, the poorest in this country becomes the most beautiful bride, everyone goes to them, just to get votes only to disappear as soon as they are done” he said.

In furtherance, he said they as a party should begin to ask questions bordering on how to choose the right candidates to project to the masses ahead of 2019, noting that no political party wins an election without the masses. He opined that any candidate fielded by the APC as its flag bearer, should be distinguished  from candidates of other parties and should not be one who acts  and operates like the others, thereby forcing the masses to vote on the  saying that  “the devil you  know is better than the one you do not know”.

Furthermore, he asserted that the party should field candidates whose first priorities are the people and how to elevate them, and use their common wealth to work for them, embrace all irrespective of class.

“Today I invite you to join me as I stand before you my people on this journey, I hope you find me worthy of your support. With that said, I Felix Morka  do very humbly offer my total self  in a sense of appeal that you support me in the journey for the ticket of our great party APC for the position of the governor of Delta State, 2019”.

Responding on behalf of the leaders, General Nick Agbogun rtd, said he is elated at the declaration and that he is not surprised, as he has been expecting it. Going down memory lane, he revealed that he has known Barr. Felix Morka for a long time and can affirm that he is from a humble family who has a wealth of knowledge yet to be tapped.

He said Barr. Morka is qualified and equipped for the job. He assured him of the support of the APC family in Ika South, saying that they are behind him.

0Shares
0 0
Share
Previous OWA-ALIZOMOR COMMUNITY PROTEST: WE ARE NOT IN SUPPORT OF ALFRED IDEHEN
Next CHIEF ANDREW EMERI, TRUE SON OF UMUNEDE KINGDOM-Monarch