It was a pathetic situation to behold as Mr. and Mrs. Alex Osadume and their five children were rendered homeless, following the collapse of their residential building, a six-bedroom duplex situated at No. 1 Alex Close, off First Powerline by Ojiukwu Street in Owa-nta along Old Abraka Road, Boji-Boji, Owa. on Monday, July 5, 2021.

Explaining to Ika Weekly Newspaper Reporter how it all happened, Mr. Alex and his wife, Eunice, said that the incident took place at about 12 pm on that fateful day when their five children have all gone to school. They stated that both of them were in front of the house, under a tree receiving fresh air, waiting for their children to return from the schools when the entire six-bedroom duplex collapsed. 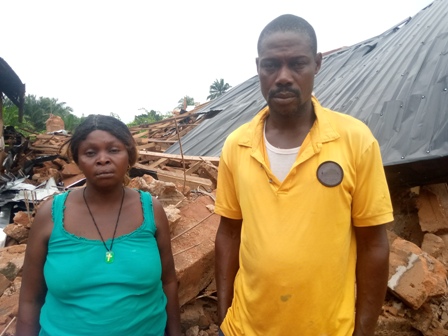 Continuing, they said, “We thank our merciful God that our duplex collapsed when nobody was inside the house. For the fact that no soul was lost, we will continue to appreciate God and return all glory to Him,” they said.

Speaking further, the couple noted that the building was a new project as they were on plastering level, the electrical and plumbing works have been done successfully and they have moved in before this incident occurred. They also disclosed that they were not able to save any of their properties, saying that everything they have in the house including money and his wife’s provision store got perished in the inferno.

They, therefore, appealed to the Delta State Government, led by His Excellency, Sen. Dr. Ifeanyi A. Okowa, and all spirited individuals in Ika land and beyond to come to their aid so that they will be able to start life again and take care of their children.

Share
Previous ELECTRICITY TARIFF: BEDC OFFERS DISCOUNT TO DEBTORS
Next WE YET TO FEEL THE IMPACT OF NWOKOLO, CHUKY-DANDY, ELEKEOKWURI – Irunkwor