The member representing Ika South Constituency at the Delta State House of Assembly and Chairman, House Committee on Commerce and Industry, Hon. Festus Chukwuyem Okoh also known as Chuky Dandy has made inquiry on why the management of Hi-Tech Construction Company handling the on-going dualization of Old Lagos /Asaba Road has been channeling water into the drainage system along the Agbor side of the road project. 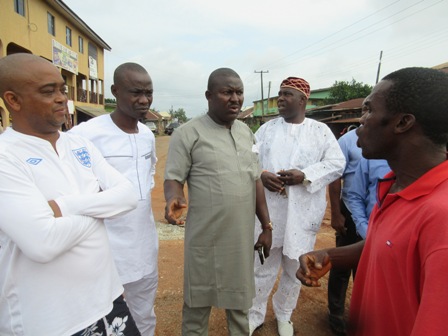 He made the move for clarity on Monday, October 9, 2017 following the complaints by residents of Dr. Whyte Street Agbor who were complaining that the company used the linkage to divert water into their street.
Responding for the company, one of the engineers who identified himself as Haruna told the lawmaker that the linkage of the drainage was an approved work by the Ministry of Works through the Commissioner for Works after his visit to investigate the reason why there have been an over flow of water damaging the already tarred road, particularly from the drains along Owa sides of the road.
He explained that the drain at the Owa side was not deep enough hence its channeling to that of Agbor side in order to balance the flow of water during down pour and to save the tarred side of the road from further damage.
According to him, “our intention is not to channel water into streets in Agbor but to make an amendment with a view of balancing the flow of water in both sides of the drains during down pour.
“If we allow erosion generated from various communities of Ika land to continue to enter the already tarred road, it will certainly destroy the road”.
He assured that with the linkage of both drains there will be no adverse effect on the residents of Agbor and their properties.
Chuky Dandy having got clarification on the work warned against poor construction work that will create a negative impact on the already well constructed drainage in Agbor, positing that he will not encourage anything that will bring suffering to his constituents.
Chuky Dandy was joined in the visit by a prolific writer from Agbor kingdom, Mr. Williams Eghebi and a community leader Chief Elema who urged the company not to over load the drain on Agbor side of the road amidst his consideration of high volume of water also coming from Emuhu community and its environs.