CHIEF EMMANUEL MBULU, THE PHILANTHROPIST AT IT AGAIN

A Canadian based entrepreneur and philanthropist of Ika extraction, a native of Igbodo kingdom, Chief Emmanuel Mbulu, The Akulue-Uno I of Igbodo Kingdom, in Ika North East Local Government Area of Delta State. 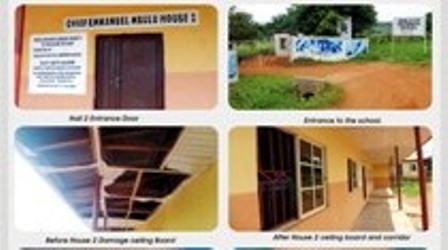 Chief Emma Mbulu, whose greatest passion is to give back to his community by  helping to improve the lives of the rural dwellers worldwide, through development, education, scholarships and charitable contributions, likens giving to solving the problems of humanity, to being as natural as breathing, is at it again.

The great virtue of benevolence which is usually displayed by the Akulue-Uno I of Igbodo kingdom, played out recently, at Anglican Grammar School, Ubulu-Uku, Aniocha South Local Government Area of Delta State; his Alma mater, where as an old boy of the school, he  single-handedly renovated a Dormitory which has long been abandoned due to its deplorable state; the long dormitory building containing two big halls, was christened, “Emmanuel Mbulu House I,” while the second Dormitory building, christened “Emmanuel Mbulu House 2,” was re-built completely.

Both buildings were dedicated to God, on Wednesday May 16, 2018. However, the buildings have not been formally commissioned.

In a telephone conversation recently with Ika Weekly Newspaper reporter, Chief Emmanuel Mbulu, said, he was not satisfied with the way government functionaries are neglecting their duties and obligations in bringing development to majority of the rural communities in Nigeria, hence his humanitarian services, which he believes should spur him to do the needful.

Continuing, Akulue-Uno stated that being involved in charitable ventures is the only way to help the next generation, because it is about humanity and giving back to the society, emphasizing that “giving back is very important, saying, it is good to be a giver because there are always blessing when you give”

Speaking further, he recounted, his early years, how his father always gave him hope and when his father died, it was his advice of “never give up, never say you can never do anything;” that kept him alive to make a difference in someone else’s life. Sharing his ordeals, Chief Mbulu, disclosed that as an international student struggling to pay his school fees and bills in Canada, he worked as a dish washer and taxi driver to make ends meet and still sent money to his mother and siblings back home. He said he was 13 when his father, a former school teacher, was murdered in Northern Nigeria in 1966, before the outbreak of the Nigerian civil war. He said, as a result of this, the family was driven into poverty, and as the eldest child, he assumed responsibility of providing for his family. According to the philanthropist, it was this and his experience after coming down south from the North, and the scholarship award given to him in 1967, by the military administration of late Brigadier Samuel Ogbemudia, of former Bendel State that enabled him sail through Anglican Grammar School, Ubulu-Uku and his sojourn at the York University in Canada, that made him vow to give back to the institutions and communities that he loves so much. He said after his first degree, he completed a Masters Degree in Business and Public Administration degree in the United States and later returned to Canada to live with his wife, Annia, The Odozi-Aku of Igbodo kingdom who also attended York University.

In 2004, Chief Mbulu said himself and his wife established the Chief Emmanuel Mbulu Foundation. Some of the laudable projects executed by the Foundation, since it was established include; The School Dormitory at Anglican Grammar School, Ubulu-Uku, The Bishop and Vicarage of St. Georges Anglican Church Igbodo, Dormitory at Mary and Martha Juniorate Convent Igbodo, The Chief Emmanuel Mbulu Community Town Hall Igbodo, Emmanuel Mbulu Primary School Igbodo, Renovated the St. Georges Anglican Church Igbodo and also built a classroom Block at the Mary and Martha Juniorate Convent Igbodo.

The areas of expertise by the Emmanuel Mbulu Foundation include; Philanthropy, fund raising, scholarships, water conservation and management irrigation.

According to Alfred A. Montapart, a philosopher, “The Environment you fashion out of your thoughts, beliefs your ideas, your philosophy is the only climate you will ever live in.” Same goes for Albert Schweitzer, who said, “The purpose of human life is to serve and to show compassion and the will to help others.” while for Mother Teresa, “Unless life is lived for others, it is not worthwhile. A self centered life is totally empty.”

Speaking further during the telephone interview, Chief Mbulu extolled the developmental strides recorded by the Delta State Governor, His Excellency Senator Ifeanyi Okowa, he however encouraged the first citizen of the state to focus more on the rehabilitation of all the primary and secondary schools across the state. Continuing, he frowned at the situation where most Nigerian youths in the course of traveling overseas for greener pasture get drown in the Mediterranean sea and in some cases others are being enslaved by their agents in the foreign countries, saying that the situation is indeed an embarrassment. He advised the youths that the situation in Nigeria is better than travelling abroad and be enslaved. He urged the leadership of the country to make life better for the citizenry, in order to curtail the high rate of migration by the youths.

He further encouraged Nigerians in the Diaspora to always extend hands of affection, no matter how little to their communities, because there are blessings from God that is attached to giving.

Although Chief Mbulu continues to manage a hectic business schedule, he continues to find time by The Power of God for philanthropic activities that impact the lives of many people in Nigeria, Canada and abroad. A Testimony of some of the Philanthropic projects Chief Emmanuel Mbulu & His wife Chief Mrs. Annia Mbulu has already completed include – but not limited to – the following:

They include but not limited to:

Chief Mbulu is a proven leader and a high achiever in the areas of business, philanthropy, and social and community involvement. He is an exemplary role model of achievements that are within the grasp of each and every African-Nigerian-Canadian and any person with the ability to dream and acknowledge that with Christ Jesus the impossible becomes Possible! He believes that the more you give, the more you receive. Overall, Chief Emmanuel Mbulu has made a profound and positive impact in Nigeria, Canada, USA and several other countries of the world. He is a living, breathing example of what a good leader, mentor and citizen should be.

Chief Mbulu has also won several awards and recognition: A few are mentioned here below.

Speaking to newsmen about the two building recently built and donated to Anglican Grammar School, Ubulu-Uku, the school principal, Mr. Emmanuel Eluemunor Idegwu, thanked God for bringing a kind-hearted man in the person of Chief Emmanuel Mbulu, to assist the school with both buildings at a time when they needed it most, saying that the school authority is very grateful. He disclosed that the projects were sponsored by the Akulue-Uno. He described the donor as a philanthropist who believes in giving to the development of humanity. He disclosed that whenever they are talking, the Chief always say that Anglican Grammar School, Ubulu-Uku, made him what he is today. On how the school is going to benefit from the projects, he stated that the school is going to increase the number of boarders. On how the students can be able to manage the projects, Mr. Idegwu, said he has two able prefects in whose company they will be able to manage the students in safeguarding the structures. He also advised the present students of the school to be hardworking and be more focused in their academic works in order to maintain the high educational standard which the school was known for.

In a chat with Ika Weekly Newspaper reporter, Master Monye Precious, one of the school prefects, appreciated the laudable efforts of Chief Emmanuel Mbulu, whom he prayed God to bless bountifully. He advised his fellow students to be very careful with the projects and its facilities. He urged them to always keep the school environment clean, so that whenever the respected Chief would be visiting, he will appreciate the school and be very happy. Continuing, Master Monye, enjoined the Old Boys of the school to emulate the humanitarian gesture of Akulue Uno, and take up one or two projects in the development of their Alma mater.

On his part, Engineer Sunday Ekwemuka, the project engineer disclosed that both projects were sponsored by the Akulue Uno. He stated that Chief Emmanuel Mbulu, informed him that the school was where he attended hence the passion to build it to quality standard. The Engineer also revealed that high quality materials were used for both projects, from the beginning to the end. He gave the life span of both buildings to last for up to Forty years. He also appreciated the principal, teachers and students of the school for the peaceful atmosphere and the cooperation he enjoyed from the community while handling the projects Engr. Ekwemuka, hinted that both buildings took him barely three months to complete. He prayed God to bless Chief Emmanuel Mbulu and his family for his selfless services in bringing development closer to his people.

Finally, it is a known fact that the Government cannot singularly meet the needs, most especially social needs of her citizens. It therefore becomes imperative for public spirited individuals who have the well withal to complement the efforts of the government in ameliorating the suffering of the people, most especially at the rural community dwellers. It is to this end that this noble son of Ikaland, Chief Emmanuel Mbulu has for almost two decades, through the Emmanuel Mbulu Foundation been helping to improve the lives of the rural dwellers. The government should as point of necessity recognize and appreciate the efforts of public spirited persons who has assisted in the development of communities such as this true noble Ika son; Chief Emmanuel Mbulu.