A source who spoke with Ika Weekly on behalf of the deceased family at Idumu–Ogbe quarter in Alegbo quarters, Idumuesah in Ika North East Local Government Area of Delta State, said, “My father was the Chief-priest of the entire Idumuesah community and has been occupying this prominent traditional position since the year 1980 without any challenge either from our family or the community members. It all happened in the afternoon of Monday, January 7, 2019 when a son of my late father’s younger brother, who was recently deported from Germany, came to my father’s house with his friends. They met only my mother who told them that my dad had gone to Ogwa-Ali, (Council of Elders) for a meeting with other elders in council and that they should come back to check on him later. This, she said, without any knowledge of their evil intention”. 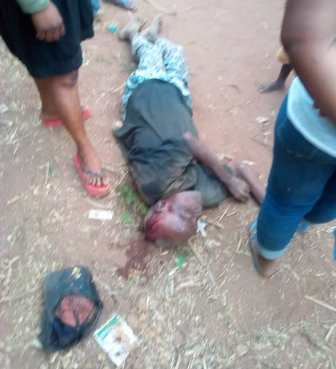 Few minutes after they departed leaving my mother in the house, my dad walked in. My mother then told him that his late brother’s son, who returned from abroad and his friend came to look for him. As they were discussing, suddenly the boys arrived on their motorcycle, walked close to my dad, brought out battle-axe, cutlass, knife and other sophisticated arms and started beating and cutting my father. At a time, my father was able to run outside when the cutlasses could not cut his body. It was then that they used rope to tie his neck, tortured him until he gave up the ghost.

The family is appealing to the government and security agency to help investigate the matter properly and bring the killers of our father to book. As at the time of filing this report, the remains of Chief Dr. Okpuzor had been deposited in the mortuary, while the police investigation continues.