The Board of Trustees and members of Clifford Ojeriakhi Imudia Foundation have brought succour to many in Ika South Local Government Area, through their donation of drugs to the local government.

The drugs received by the Vice Chairman of the Local Government, Hon. Patience Agborma at the Council Secretariat recently, are according to the Foundation, part of activities carried out by them to ensure that the legacies of their late father, Clifford Ojeriakhi Imudia lives on. 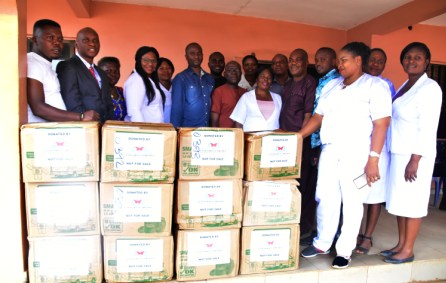 He noted that the Foundation has supported the Local Government since its inception in 2012 Pastor Philip Imudia presenting the drugs said, they have also collaborated with Agbor USA in carrying out their humanitarian deeds.

He also revealed that the foundation through the support of a team of medical Doctors in Tampa, Florida, USA has established a pilot project to provide uninterrupted supply of drugs to selected patients of High blood pressure and diabetics from Oza-Nogogo with plans to extend it to other communities in the Local Government.  He further stated that the venture will continue if the drugs dispensing is properly accounted for.

Receiving the drugs, the Council Chairman, Hon Barr. Victor Okoh represented by his Vice, Hon. Mrs. Agborma, commended the Foundation, saying that government and private partnership is the way to go. He applauded them for the gesture which he said is complementing the health of all Deltans, policy of the State Government.  He prayed for more wisdom on the foundation to do more.

He charged Nurses from all Primary Health Care Centers who took possession of the drugs to dispense them judiciously to patients for free, noting that it is their core responsibility to take care of the health of their patients.

Prior to this donation, the Foundation also partnered with Oza Elite Association in carrying out free medical Mission which saw over 500 glasses given out to patients and 1000 persons screened  for diabetics and High blood pressure during the Oza day celebration. The Foundation in 2018 also gave out scholarships to deserving students from Oza- Nogogo, sponsored by Dr. Patrick Agborma and Dr. Florence Agborma. Members of the Board of Trustees are: Dr. Martins Imudia, Engr. Godfrey Imudia, Engr. Nick Imudia, and Dr. Tony Imudia all based in the USA.