The Non Custodian Unit of Correctional Centre, Agbor, has called on well meaning individuals and organizations to assist in the provision of a secretariat for the organisation as they revealed that minor and first time offenders can now serve their sentence from their homes.

This was made known to newsmen, during a familiarization visit by officers of the Correctional Centre, Non Custodian, Agbor to the Dein of Agbor palace on Thursday March 25, 2021 at the Agbor Royal Palace, Agbor Ika South Local Government Area of Delta State.

In his address the Deputy Superintendent Corrections, DSC Tuesday Egun informed His Majesty that due to a new Act by the National Assembly, the name Prison Service was changed to Correctional Service, adding that the outfit was also partitioned into two; the Custodian and Non Custodian pointing out that the visiting officers were of the Non Custodian unit.

Speaking further, DSC Egun noted that as head of the non custodian, he has acquired an office for the unit in Ika Northeast and one at Kwale but said unfortunately, he is yet to get one in Ika South even after having written series of letters to no avail during the tenure of the former Local Government  Council Chairman, Barr. Victor Okoh. 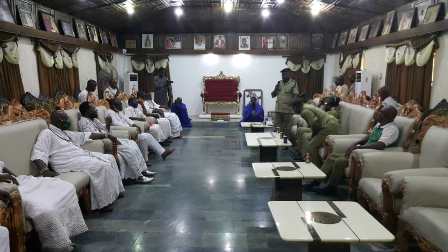 He said there is need for the Correctional Service to synergize with the palace, adding that with the current trend, minor offenders can now serve their sentences from home being supervised by non custodian officers.

In his response, Chief Nayaba who spoke on behalf of His Majesty bemoaned the situation where federal government parastatals come seeking for accommodation for use as secretariat. He however reiterated His Majesty’s willingness to assist in ensuring that the office space for Ika South is made available, more so as the head of the department is a subject of His Majesty.

Chief Nayaba then assured the officers of the palace’s readiness to synergize with the non custodian department of the Correctional Centre.