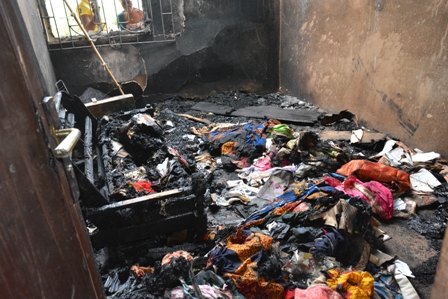 A mysterious fire whose source was untraceable has left a petty trader Mrs. Ade Abigail desolate and helpless. The incident which took place at her residence at Carter Street by Emordi Street at about 2pm on Tuesday 19th September 2017 with no trace to the source destroyed properties worth Thousands of Naira.

Narrating her ordeal, Mrs. Ade said, “I was in the market when I got a call that my house was on fire, I can’t explain, I don’t know what happened and I am short of words. Nothing was on; there was no appliance or electrical equipment on. There was no one at home, and the fire destroyed everything, including my children’s documents and valuables.”

Digging further into the possible source of the fire, it was gathered that such an occurrence has been on in the area, as neighbors said this was the fourth experience in recent time. They pointed the source of the incident to a recent development of suspected hoodlums who break into people’s houses, steal and set or the house on fire if nothing is found. They lamented the gross insecurity in the area, and called on the government to provide a form of security to curtail future occurrences.

Confirming their suspicion, there was a vandalized window which is suspected to be the entry point of the hoodlums into the house, which they set ablaze after their operation. It was also gathered that the fire was put out by workers working on a building site close by, on seeing the flames of the fire from their site.


Mrs. Ade, a trader at CTC market Agbor who was still in shock at the time Ika Weekly Newspaper reporter visited her house, said she has nowhere else to go, and she does not know where to start from.