A fully loaded truck belonging to Aliko Dangote Cement Company truck was burnt to ashes, on Monday April 8, 2019 shortly after crushing a pedestrian to death. The incident took place along the New Lagos\Asaba Expressway, opposite Mr. Biggs, Agbor, at about 7: 50 am on the fateful day.

Speaking with newsmen at the scene of the accident, the Commander of the Federal Road Safety Corps Agbor Unit T Mr. Biggs, Mr. Bitrus Y.D said he was briefed by some eye witnesses that the Dangote truck which was fully loaded with bags of cement crushed a young man who was walking on his own direction.  According to him, the Dangote truck as he had investigated, was coming from Uromi junction, heading to Asaba axis, and the pedestrian who was sent an errand by his Boss, was walking towards Uromi Junction on his rightful side when suddenly, the Dangote truck diverted to the other side of the road, trying to take through the “one way” and crushed the young man to death.

The FRSC Commander therefore advised all drivers to be very careful the way they drive on the road. He stated that the Agbor FRSC has been warning drivers, particularly the Dangote drivers against reckless driving but they have refused to heed to the warning. He further said that he and his men have also been warning Ika residents on the dangers of driving against traffic and other tragic offences that might lead to accidents or crashes. 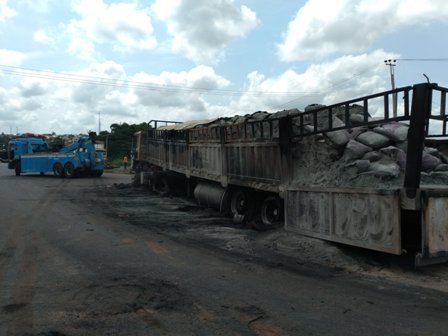 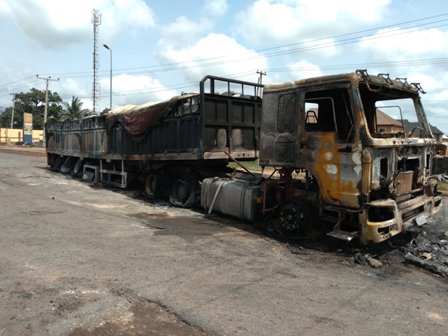 Speaking further, he admonished citizens to always be careful and observant while making use of the roads to ensure safety of lives.

He also advised pedestrians to be watchful and exercises patient before crossing the road because of some drunks and mad drivers.

Meanwhile, sympathizers commended the FRSC staff that spent the whole day at the accident scene while they even mounted road block at the front and back all through the night till the next morning to avoid any other accident along that road. They thanked the Commander and his men for a job well done, urging them to continue in such manner.

The driver and his conductor were nowhere to be found at the time of this report.