The revered monarch of Agbor Kingdom, His Royal Majesty, Dr. Benjamin Ikenchuku I, the Dein of Agbor Kingdom, has commended the Governor of Delta State, Senator Dr. Ifeanyi Okowa for his developmental strides in the area of women empowerment in Agbor and the state at large. 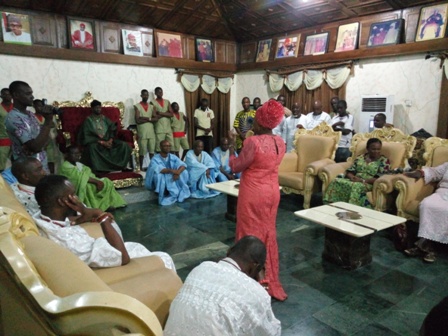 The Dein gave the commendation while playing host to a college of the PDP women leaders in Ika South LGA led by the Special Assistant to the Governor on Women Mobilization, Ezinne, Cecilia Ogbonyeri and the deputy chairman of Ika South LG Council, Hon. Mrs. Patience N. Agboma.

In her address, Ezinne Cecilia Ogbonyeri  said they were honoured to be received by the monarch at his palace, disclosing that the reasons for their coming was to congratulate him on the birth of the crown prince and also to bring to the notice of his majesty the impacts of Governor Okowa’s government on the women, particularly in Agbor kingdom.

She said Governor Okowa has appointed some women into his cabinet as his aides, appointed two women in each Wards in Agbor as  Liaison officers receiving #25,000 every month and to add to their joy, empowered 150 women with #20,000 each. She also said the state governor has concluded plans to put over 363 widows in his pay roll every month, coupled with other exciting packages such as free medical healthcare, amongst others. According to her, children between the age of 0- 5 have been enjoying free medical care in government hospitals, adding that in line with the above mentioned achievements and more by the state government, the women in Agbor and Ika South local government at large are happy and would stand firmly by Governor Okowa to reelect him for a second tenure in the forthcoming general election.

Speaking in the same vein, Ezinne Ogbonyeri thanked the monarch and also pledged their support and loyalty to the Kingdom. She noted that they will live as expected of them as mothers to give good advice to their children and husbands who are particularly in politics to enable them do the needful.

Dein who in his response thanked the governor for all he has done for the women, described his antecedents as listed by Ezinne Ogbonyeri as unprecedented. He remarked that the need for women to be given more recognition cannot be over emphasized, stressing that they are the greatest gift God has given to man, hence, it is forbidden for them to be considered as inferiors.

According to the monarch, women are epitome of life, because life comes from them. They are of great importance in building peace in the society. They cook for u and look after our households and our most precious commodity (our Children).

He enjoined the governor to do more for the women particularly in recognizing them in awarding contracts and as well occupy in political appointments to enable them help government to effectively bring the dividend of democracy to the people.

Speaking further, the Dein urged the women to do as promised in joining the entire people of Delta State to give their unalloyed support for Governor Okowa in order for him to do more for the people. He charged the deputy chairman of Ika South LG council, Hon. Mrs Agboma to endeavour to bring peace, understanding and also hold regular meetings with the Council Chairman, Hon. Barr. Victor Okoh, to discuss issues in order not to give room for rancor in the Council. He concluded with words of blessings for the women and Governor Okowa.