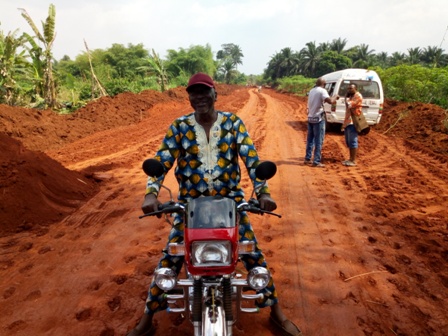 The indigenes who were beaming with smiles while speaking separately to Ika Weekly reporter during a visit to the Dein Palace/ Oza-Nogogo Road project site, said they will ever remain grateful to Governor Okowa for remembering the community.

One of the indigenes, Mr. Igbinosa Charles expressing his joy, said the community’s major road which is now receiving government attention had been neglected for over 3 decades. He said, “Okowa has done well for us as the construction work will ease our movement through this our major road to the town”. 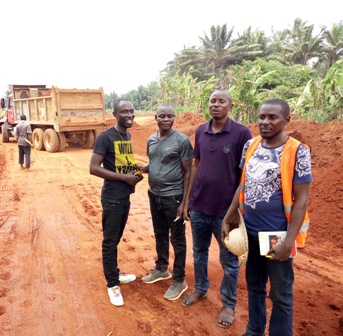 An elderly woman, Mrs. Victoria Amure, who was returning from the market on a commercial motorcycle, plying the road said, “We are very grateful to our son, Dr. Ifeanyi Okowa. We have been voting since 1999 but no one seemed to remember this road as it had long been abandoned by past governments.

“Years ago, a Good Samaritan came to grade the road. His effort was commendable, but we were later left with persistent dust that filled our nostrils because the work was abandoned”. She was overwhelmed with joy because the dust from the abandoned road which used to give her heartache will be no longer be, as the road will in no distant time be tarred.“We are happy for this road construction because for long, the dust tormented us. We are proud that when this road is completed, our plight will be over. We thank Okowa for this project. This road used to be bad and partly flooded when it rains,” she said.

Another resident and a business man, Prince Salami, who explained that the road had been bad for a very long time and had affected the residents a great deal, said, “We are excited about this construction after many years of neglect. Actually, awarding of the second phase of the road project is a good development. This has proven that Governor Okowa’s SMART agenda is indeed prosperity for all, and we are thankful to him.”

On his part, the Councilor representing Ward 3, Hon. Jerome Ozakpolor described the Dein Palace/ Oza-Nogogo Road project as, “good, perfect and going on well”. He said “We want to thank the Delta State Government for this very good work. It is the first time any government will be coming to our aid since the return of democracy in 1999”. Hon. Ozakpolor while commending the construction company for the good job they are doing, urged the site engineer, Mr. Ayo Ekins, to increase his pace as the rain has already started. “We know it is not easy but the faster the better. Construction does not go well in because whenever it rains, it is a trouble for us,” he added.

Also, an elderly man, Mr. Promise Irabor, on his part eulogized the governor for making impact in his place of birth. According to him, “I believe God is happy with the Governor with this work he has embarked upon. The Lord will give him more wisdom and strength.”

He concluded by observing that the Dein Palace/ Oza-Nogogo Road project will be the beginning of many more and good things to come to the people of  Oza-Nogogo.

0Shares
0 0 0
Share
Previous HOUSE OF REPS 2019: IKA NORTH EAST, PLEASE BE YOUR BROTHER’S KEEPER
Next DAME MERCY ONEKPE CHARGES MOTHERS TO WAKE UP TO THEIR RESPONSIBILITIES