The joy over the expected completion of the long abandoned Dein Palace/Oza -Nogogo road in Agbor seems to be high as the construction company handling the road project, Bube-Dan, has mobilized to site. 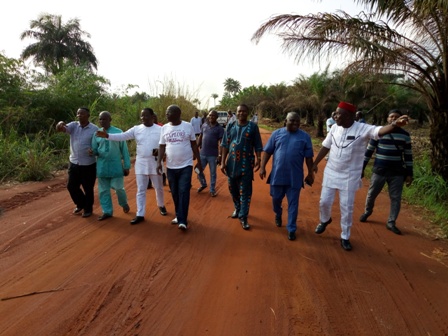 It could be recalled that the Delta State Government under the leadership of Senator Dr. Ifeanyi Okowa recently approved the completion of the ancestral road in Agbor measuring 5 kilometers of which 1kilometer had already been tarred.

The stakeholders, who were overwhelmed by the commencement of the job in their separate remarks, commended Governor Okowa for being patriotic to putting smile on the faces of Oza-Nogogo people and Agbor at large. They said with the full construction of the road, both economic and social activities in the community will thrive.

According to them, the impact of the governor cannot be overemphasized as his antecedents through his SMART agenda are on ground for all to testify. They said he has done so much for the community and Ika South as a whole saying that people are happy, praying to the Almighty God to grant him long life in good health and progress.

The duo of Mr. Lucky Udeme Ewere, a leader in Ward 8 and Mr. Odozi Osayense Samuel, indigenes of Owu quarters in Oza, said Governor Okowa came to favour Oza people by filling the vacuum which according to them was created by the past administrations of the state, adding that the peoples need is not bags of money or rice but real development through infrastructural and human capital. They remarked that Governor Okowa has scored 99 percent and would be voted for in his second tenure in Oza-Nogogo.

On his part, the President General of Oza-Nogogo Improvement Union, Mr. Henry Isele, noted that the impact of Governor Okowa in the community shows that he loves the people. He on behalf of his people thanked the governor and encouraged him to do more for Oza-Nogogo community. He equally thanked the contractors for commencing work on the road on time.

Meanwhile, a spokesman of the construction company who spoke in anonymity assured that with fair weather, work on the road will be completed in two months.