The Dein of Agbor, His Royal Majesty, Dr. Benjamin Ikenchuku Keagborekuzi I visited the scene of the damaged Edike market to assess the situation.

While he thanked God that no life was lost, he said the Edike market disaster was natural, and commended the Ika South Local Government Council Chairman, Hon. Victor Okoh for the foresight in embarking on such a laudable project. 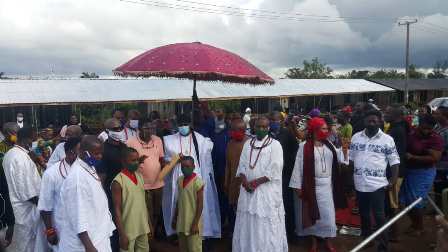 The monarch who was accompanied by some Chiefs; the President General, Agbor Community Union (ACU); Ndichen Agbor; and Idibo Dein urged the Edike market traders to obey the directives of the State Government on the preventive measures against the spread of COVID-19, while sadly noting that most of the traders were not putting on facemasks. He said life and health are more important than anything else.

Responding, the Ika South Local Government Council Chairman Barr Victor Okoh thanked His Royal Majesty for the visit to Edike market, adding that he is humbled by the show of love by the monarch. He reiterated that his administration is committed to serving the people of Ika South, adding that the reconstruction at the collapsed section of the Edike market had already commenced.

The Ika South Local Government Council Chairman Hon. Bar. Victor Okoh, disclosed that the portion of the market which collapsed due to heavy downpour on Tuesday September 8, 2020 was still under construction and that was the reason it collapsed.

0Shares
0 0
Share
Previous EDIKE MARKET: WE ONLY PLAY ADVISORY ROLE – Chuky Dandy
Next CAMA LAW AND THE INDOLENCE AMONG CHRISTIANS BY OMILO