The Delta State University, Abraka (DELSU) has been incorporated as a research centre in the global efforts to address the scourge of malaria which is a major public health challenge in Africa.

The incorporation was announced over the weekend on Saturday, October 3, 2020 at the award ceremony in Abraka where Hon. Ned Nwoko was conferred with the coveted Distinguished Service Award by the university for his unwavering dedication to humanitarian endeavours, education and malaria eradication in Africa. He currently supports a multimillion dollar research for the development of an anti-malaria vaccine. At the colourful ceremony which attracted guests from far and wide (who complied with the COVID 19 protocols as enunciated by the National Centre for Disease control (NCDC), the Vice-Chancellor of the Delta State University, Abraka, Prof Andy. Egwunyenga commended the awardee for his admirable and sustained campaign against malaria in Africa. 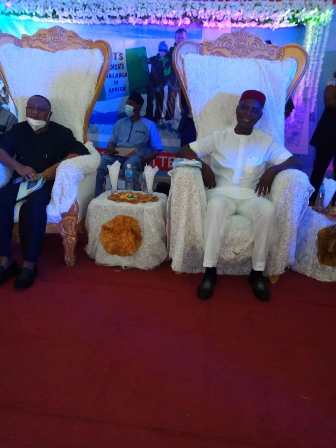 Prof Egwunyenga, a first rate scholar and astute administrator who he said is passionate about finding a solution to the ravages of malaria, which also inspired his area of interest for his PhD thesis at the University of Jos, Nigeria, noted that the awardee is one of the few persons who have, in concrete terms, demonstrated love for the university. In presenting the award plaque to Prince Nwoko, Prof Egwunyenga who has been giving DELSU enlightened and committed leadership, observed that his contribution to the fight against malaria was the originality and ingenuity of his ideas about the control of malaria, noting, “that is what we stand for at Delta State University”.

While congratulating the awardee on his well deserved award, Prof Egwunyenga reiterated his position that the university must be innovative by thinking out of the box in addressing issues that daily crop up.

Speaking at the occasion, Dr. Mrs. J.O. Ogwezi, the Ag. Head of Department of Mass Communication which initiated the award, and actively supported by Prof A. Otite, the Dean of the Faculty of the Social Sciences, Delta State University, Abraka, informed the audience that the department has, in its 28 years of existence, graduated over 2,000 students in the Bachelor of Arts, and later, Bachelor of Science Degrees in Mass Communication. It has also graduated a substantial number in the Masters programme while the PhD programme is in full swing.

READ ALSO: THERE IS A DIFFERENCE BETWEEN SCHOOLING AND EDUCATION &#8211; Dr. (Mrs.) Patricia Akumabor

She assured guests that “As we look forward to the new phase with the unbundling of Mass Communication by the National Universities Commission (NUC), we are determined to deploy programmes that are sufficiently responsive to the current market trends and needs, industry transitions and reflect international standards in communication and media education as we prepare our students to become leading leaders in the industry”.

Responding to the conferment of the award, an elated Prince Nwoko, a Member of the House of Representatives from 1999 – 2003, expressed gratitude for being found worthy of such honour, noting that he was inspired by such recognitions and pledged that the malaria eradication campaign would succeed. “I believe that malaria is an African problem and it must be addressed by Africans”, he told the audience.

READ ALSO: I AM NOT INTO POLITICS FOR MONEY- Ned Nwoko

Highlighting the problem of malaria, he cited the World Health Organisation (WHO) as reporting that malaria claims about half a million lives annually, much higher than the dreaded COVID- 19 could claim in Africa within the same period. His malaria eradication campaign took him to the Antarctica, which he described as the most difficult part of the world – “very cold, with no houses, no shops, no hospitals, no trees, no flowers, a sea of ice!”

Despite the inclement climate of the Antarctica, the founder of the Stars University which is under construction, said he went there because of the research centres where Americans, Chinese, Indians and other research oriented countries are firmly established in the continent. He said he would not be dissuaded despite the frightening picture painted by those who had been there. “I don’t allow the word ‘impossible’ in my life”, he said. According to the Prince who has an honorary doctorate degree from the Federal University of Petroleum Resources (FUPRE), Effurun, dirty environment encourages the breeding of mosquitoes which are carriers of the disease. He has therefore decided to take the campaign further by embarking on a clean Nigeria advocacy, with the value chain that would create about three million jobs.

Share
Previous OSHIOMHOLE, VIOLATED LAWS AND THE LESSONS LEARNT
Next RITES IN CONNECTION WITH CHILD BIRTH IN IKA CULTURE