It was celebration galore on Sunday 4th November 2018 as the former Provost, College of Education, Agbor, Dr. Emmanuel U. Tibi celebrated his retirement from active service as well as his 65th birthday anniversary. 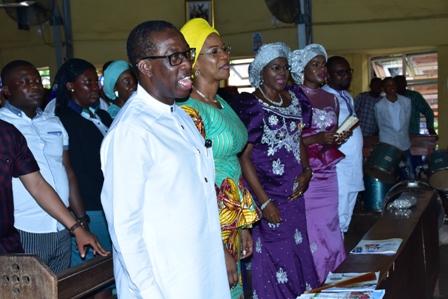 Celebrating the Mass, Ven. Rev Fr. Pius Iwagu appreciated the family of Dr. Tibi for their donation to the church, congratulating the celebrant on his double achievement of retirement and attaining 65.

Expressing his appreciation to God for the journey so far, Dr. Emmanuel Tibi stated that his strength is derived from his family and friends. He expressed profound gratitude to the Governor, his wife Dame Edith Okowa and all who came in their numbers to celebrate him. The celebrant, who doubles as the Ojenebo of Agbor Kingdom, and the President, Rotary Club of Agbor, said he is thankful to God for his guidance through it all. He appreciated God for his family and friends whom he said have been a part of his journey through life.

Dr. Emmanuel Tibi noted that his strength is derived from the friendships he has cultivated overtime, noting that he is amazed at the calibre of people who left their busy schedules to felicitate with him, particularly Sen. Dr. Ifeanyi Okowa. He maintained that he is grateful to God on his retirement and clocking 65.

At the reception which held at Colleges of Education Agbor open field,  guests, friends, colleagues, club members, well wishers and those who described themselves as ‘Ojenebo boys’ flocked in their large numbers to celebrate with the man who was described as a jolly good fellow, a mentor, friend, father and brother to all. 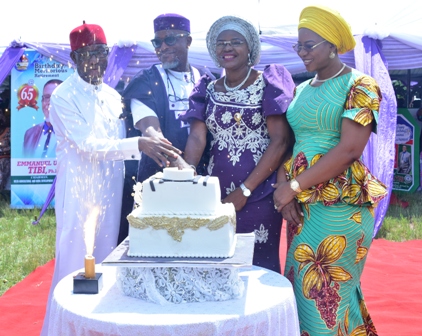