EDITORIAL:RE-APPOINTMENT OF ONWUKA AS SPECIAL ASSISTANT

The recent re-appointment of Jonathan Onwuka as the Special Assistant on Community News Media by the Executive Governor of Delta State, Senator (Dr) Ifeanyi Okowa, can only be described as commendable.

Apart from the time-honoured saying that ‘one good turn deserves another’, what made this re-appointment commendable is that as a consummate communication practitioner, he gave very good account of himself. And it is on this ground that the Publisher, Members of the Editorial Board and the entire Staff of Ika Weekly Newspaper congratulate our erstwhile editor, Mr. Jonathan Onwuka and wish him a very fruitful second term in office. 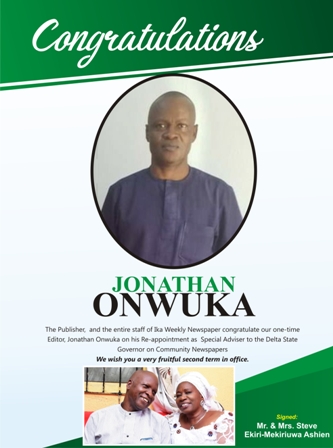 Essentially aside from being a close associate of the newspaper, there are two similar but separate reasons for this week’s editorial comment to his re-appointment.

First, as an Editorial Board of a community newspaper (Ika Weekly Newspaper), we were placed at a vintage position to relate with and monitor both Jonathan Onwuka’s office and activities, we can attest to the fact that he rendered his duty seamlessly.

In like manner, Onwuka, from what Deltans are saying has, in his first term bridged the information gaps that once existed between the government and the governed, particularly Deltans at the grassroots.

However, this they say might be an extremely demanding period for Mr. Onwuka as the reward for success, is more work. With this in mind, it will be rewarding to inform you that the main purpose for this editorial comment is but to encourage him to point out the direction he should pursue as more work is still needed to be done and more reforms are still crying for attention.

Regardless of what others may say, it is our objective view that Governor Okowa did a whole lot of work in his first term but was not adequately reported at the grassroots. Likewise, there are urgent needs yearning for the government’s attentions. But such cries are not getting to the ears of the governor because of the communication gap.