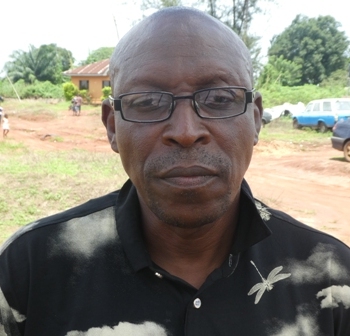 The arrest of Elder Moses Nwakor, a factional Chairman of the All Progressives Congress (APC), Ika South, few days ago by security operatives on allegation of impersonation and fraudulently collecting the sum of One Million and Fifty Thousand Naira, donated by Hon. Engr. Victor Ochei, during his consultation visit has generated public reaction. According to Barrister Chuks Ogbuobodo, Elder Nwakor’s action is fraudulent.

Narrating the incidence of what led to the arrest of Elder Moses Nwakor, during an interactive session with newsmen at the premises of the Agbor Police Area Command, on Wednesday September 19,2018, Barrister Chuks Ogbuobodo, who introduced himself as a practicing lawyer in Agbor and a member of the All Progressives Party (APC) in Ika South Local Government Area, disclosed that APC as a party has various factions as a result of the greed of man, namely; Chief Okoruwe’s faction, where he belongs, Elder Nwakor’s faction, Hon. Victor Akpenyi’s faction, Hon. Doris Uboh’s faction and Barr. Felix Morka’s faction.

Speaking further, Barr Ogbuobodo, revealed that when Dr. Cairo Ojougboh made his consultation. he never invited members of other factions, hence they shared the money which Dr. Cairo gave them, all alone. But when Hon. Ochei, their principal told them that he would be going round for consultation, they advised him that APC is one, hence he should invite all other factions to the meeting, which he agreed to and invited all the factional heads in Ika land, including Elder Moses Nwakor.
Continuing, the legal luminary disclosed that at the meeting which took place on Saturday September 15, 2018, at Shalom Christian Centre, Opposite Zenith Bank, Agbor, Hon. Ochei informed the gathering that he was on a consultation visit to the party leaders and faithful in the area, and gave them the sum of one million and fifty thousand naira.

He recounted how they resolved that the money would be shared the following day after Sunday’s church service, with the instruction that Elder Moses Nwakor should call the factional group leaders in order for them to know how the money would be shared.
Speaking further, he stated that Elder Nwakor called him around 1: pm the following day asking him to come to his residence. He said that while he was with him, Elder Nwakor told him that he had shared the money. He said that at that instance asked him why he had to share the money alone without others, and he responded that he was the party Chairman Barr. Ogbuobodo said he rebuked him and told him that being a party Chairman does not mean that the party belongs to him.

Going further, he said that Elder Nwakor, gave him forty thousand naira as the share of his group, but he refused to accept the money insisting that Elder Nwakor should bring the money so that it can be shared equally among all the factions.

Barr. Ogbuobodo, said that while he was still discussing with him, some party leaders in his group went to the police station to effect the arrest of Elder Nwakor because they noticed that some members of their youth wing were ready for a fight to get their money.

When asked by newsmen whether the police were able to get the money from Elder Nwakor, he said, “I think the police was able to retrieve the sum of Two Hundred and Forty Thousand Naira from him, from the total amount of one million and fifty thousand naira.”

Barrister Ogbuobodo maintained that the action of Elder Nwakor, collecting the money meant for members of the party was fraudulent, saying that the police knows what to do and urged them to charge the factional chairman to court, emphasizing that this is not the first time the man is doing such a thing.

Barr. Ogbuobodo further informed the newsmen that Dr. Cairo Ojougboh is not part of the fraudulent act committed by Elder Moses Nwakor.