Encomiums have continued to pour in following the nomination, screening and ultimately swearing- in of Five new High Court Judges on Wednesday 28 March, 2018 by Governor Ifeanyi Okowa.     The swearing in which was conducted at Unity Hall, Government House Asaba, saw dignitaries and stakeholders from Ika land gather to celebrate with one of the judges who is of Ika extraction, Hon. Justice Joe Egwu. 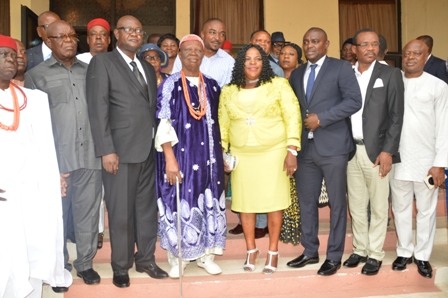 He said as Judges of the High Court, they should practice fairness, equity, and justice at all times, in order to maintain discipline.  He also charged them to continue in their spirit of hard work and dedication which earned them the appointments, stressing that they should not rest on their oars.

Speaking at the reception ceremony of Justice Joe Egwu at Hotel Benezia, Asaba, the Chief Judge of Delta State, Marshal Umukoro congratulated him for scaling through the processes of nomination by the Bar, screening by the DSS despite various petitions and hurdles from Owa people.

Justice Joe Egwu appreciated HRM, Dr. E.O Efeizomor, the Obi of Owa, for his support.  He said the new position comes with new challenges, as he appealed to friends and family members of Justice Egwu to grant him the enabling environment to succeed in his new position. He described the appointment as a great feat for Owa people, and Ika people as a whole.

Also congratulating Justice Egwu, Hon. (Barr.)  Victor Ebonka, Chairman, Ika North East Local Government Area, said his appointment is an honour for Ika land, even as he expressed joy more so as he is particularly from Ika North East and Owa-Alizomor in particular.  He said the appointment shows that there are hardworking men and women from the local government. He described Justice Egwu as a hard working, determined and committed man with high repute and integrity that has paid his dues overtime and scaled through the rigorous processes of getting nominated, screened and confirmed.

HRM, Dr. E.O Efeizomor, OON, JP, the Obi of Owa who was present to celebrate with an Owa son, said the appointment means there is huge progress and upward development in Ika Nation, saying that it will help to enhance peace and happiness in Ika land. He appreciated Governor Ifeanyi Okowa, the Chief Judge of the State, Marshal Umukoro and everyone who contributed to the appointment.  He prayed for an enabling grace upon Justice Egwu to perform well in his new designation.

On his part, Chief Justice Ehiwarior speaking with newsmen said   he is elated by the appointment of Justice Egwu who regards him as his mentor, stating that he has full confidence in him to deliver and carry out his job diligently.

Hon. Barr.  Austin Bienose, Chairman, Nigeria Bar Association, (NBA) Agbor Branch, disclosed that the installation of their member as a High Court Judge in Delta State is a prayer answered as they have been agitating for a judge to be appointed from Agbor Bar Association.  He noted that Ika land has gotten a plus with this achievement, as they now have a judge whose words are backed by power.

He called on other lawyers to work hard, be diligent, be respectful to senior colleagues and build their pedigrees, like the celebrant whom he described as a very humble, hardworking and respectful man.

The Celebrant, Hon. Justice Joe Egwu speaking to newsmen after the event expressed joy at being called to service, stating that he has been given an opportunity by the governor to serve the people. He promised to do justice to all manner of persons who will appear before him, irrespective of whose ox isl be gored in the process of the discharge of his duty. He said he will do away with personal interests in carrying out his new assignment.   Giving a word of encouragement to upcoming lawyers, he charged them to work hard and maintain their faith in God, saying that it will be their turn in the nearest future.

Justice Egwu who was called to the Bar on the 22nd of March 1995 has over 20years of experience as a lawyer, and has been in private practice for a long time.