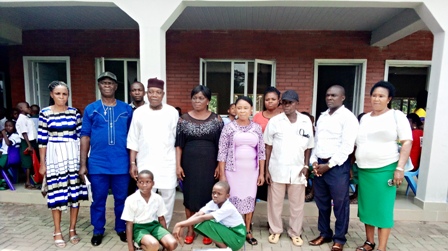 Uweifo Primary School, a beautifully designed edifice in the heart of Ewuru community on Wednesday the 2nd of October was visited by philanthropists who are sons of the community and had free writing and educational materials donated to each pupil of the school.

The  programme executor, Ewuru Education Incentive, Mr. Ogwu O Benjamin, a retired senior police officer of Ewuru-Agbor community who presently resides in Ewuru his hometown  and engages in community leadership and development activities, while delivering free writing and educational materials to every pupil of Uweifo Primary School on behalf of the organisers, noted that the Ewuru Education Incentive Programme is organized by a group of persons who have decided to give back to their root; the Ewuru community and as a way of showing appreciation to the community and to God for His numerous blessings.

Speaking further he disclosed that the Ewuru Education Incentive programme is an annual initiative that has been on since 2011 and provides free writing materials to every pupil of Uweifo Primary School.

While speaking, Mrs. Odigwe Victoria Adim, the headmistress of the school who was full of appreciation to the organizers stated that the organizers have taken it as a fatherly function to on a yearly basis provide every writing material a pupil may need at the beginning of a new class (first term).

Mrs. Adim seized the opportunity to express gratitude to the school’s Benefactor; one of the Ebeano brothers, Lucky Egede owner of Ebeano Supermarket in Lekki Lagos, who has given a befitting face-lift to the school by renovating and providing them with Infrastructural amenities needed by the school.

She further disclosed that after the recent innovation by the Ebeano brother, the population strength of the school has skyrocketed from one hundred and thirty (130) to three hundred and twenty (320).

The headmistress also confirmed that the school has been provided with a well equipped computer room with about 40 computer sets and also announced that her primary two pupils now at least know how to boot and shut down a computer system among other acquired computer skills.

However Mrs. Adim lamented that the school is challenged by in adequate man power and pleaded with the organisers of the programme to help solicit the government to employ more teachers to the school as the number of students have doubled. PERSONAL GROWTH THROUGH SERVICE BY LUCKY EGEDE

Finally she pleaded with parents to pay more attention to their children as some of them appear in school every morning looking very rough and unkempt. According to her “some of the pupils have new books and uniforms which were also donated to them but kept at home by their parents for reasons not known to me instead of allowing the pupils come with them to school. I urge parents to do more so as to support the teachers and the school.

Among items presented to the pupils who appear to have been eagerly expecting the writing materials include; 80 leaves,60 leaves,40 leaves, 2A notebooks, 2B notebooks, writing books, drawing books, biros, pencils, rulers, sharpeners and  erasers. THE REBUILT UWEIFO PRIMARY SCHOOL, A BEAUTY TO BEHOLD

Before the official presentation of the materials, a brief lecture was given to the pupils by Mr. G.C.E Okojie, admonishing the pupils on the importance of education and what they should do to accomplish their various career dreams.

Also present at the occasion was Imasua A. Amino, the Executive Education Secretary Ika South Local Government who also appreciated the efforts of the organisers of the Ewuru Education Incentive in donating writing materials on a yearly basis to the pupils.