EWURU WILL SURPASS ITS PAST GLORY – Benjamin Ogwu

A retired Police Officer, Mr. Benjamin Ogwu had in an interview with Ịka Weekly reporter during the second phase of the distribution of the palliatives for the people of Ewuru community, on Sunday May 10, 2020 stated that the community, following the recent development would go beyond her past glory.

Mr. Ogwu revealed that the palliative donated by individuals for the community and other developmental projects point towards the direction of Ewuru becoming great community in the nearest future.

His words, “The palliative incidentally is one of our incentives for the community. It was necessitated by the outbreak of the coronavirus and the consequent lockdown directive by the state and federal governments. Bearing in mind the suffering our people and indeed others would be going through as a result, we had to contact our children, our brothers and sisters outside the community; both at home and in Diaspora to reach out to the needy, and in less than a month, we got an overwhelming response. The money donated was able to get us 350 bags of 25kg of rice, 31 bags of beans, 3 bags of onions, cartons of groundnut oil and tomato paste.

“During the Nigerian Civil War, a lot of persons died as a result of lack of food which brought kwashiokor to the people. What we are facing today as a result of the virus has the similitude of war, so we have to stand up for our people. The list we compiled were of three categories:  First, Mr. and Mrs. This category is for those who are married to an indigene of Ewuru and are staying in Ewuru; second, those who have built houses in Ewuru and those who have stayed in the community for a period of twenty years or more; and third, widows in Ewuru.

“Going round houses in the community, we had a total number of 350 persons, and that was the target we had in providing the incentive. Each person in the category went home with a bag of 25kg rice, three baskets of beans, a litre of groundnut oil, 7 bulbs of onions and 5 sachets of tomato paste.

“After the first distribution, our attention was drawn to the complaint of some persons whose names were not in the first list owing to human errors. Arrangement was made for them, and by God’s grace we got another donation for them, and they partook in the gesture as well,” he said. 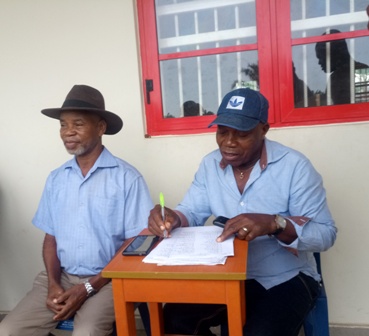 Speaking further, Mr. Ogwu thanked the benefactors for the gesture, and the beneficiaries as well for their comportment.  According to him, “we are also grateful to the beneficiaries, because they were able to comport themselves, during the whole process, as a result, everything went smoothly. The cooperation and maturity of our people have been bringing meaningful development and peace to the land. Also, the trust and confidence that the beneficiaries and the donors have on the committee, made it all a reality.

“The committee has been on since 2011, and there is accountability and delivery in all the projects we have so far handled. This is because those in the committee are not seeking their own interest, but are rather part of the project; contributing their own quota to help the needy and aid the growth of the community. The contrast is the case with our today’s leaders and contractors; everyone is concerned with what to gain from each project. So, what finally gets to the people at the end of the barbaric grabbing and corruption is little above nothing. We saw how a cup of rice and a cup of beans were given to the masses as palliatives. It is ridiculous to say the least.”

Mr. Ogwu also revealed the continuous prayer for the people and expressed optimism of Ewuru being in its acme in the nearest future. “My prayer to God for all who are involved in this palliative for our community and indeed other meaningful projects going on in Ewuru, is that God will richly bless and protect them and their families. In fact, we book mass every Sunday to pray for them and the entire Ewuru community. We have been seeing the mighty hand of God upon our people as a result. Ewuru belongs to God and God will not stop watching over us. I believe in the next ten years, The glory of Ewuru will return and will  be far more than its first glory as the industrial city of Ịka nation,” he said.