In a bid to respond to the safety of victims of natural disaster who are internally displaced in Delta state, the Federal Government has unveiled the IDP Camp; a state of the art complex at Alisimie community in Agbor.The project was constructed by Davoris Limited awarded in late 2015 through the efforts of the presidential committee on flood relief and rehabilitation co-chaired by Alhaji Aliko Dangote and a Senior Advocate of Nigeria, Mr. Abakoba. 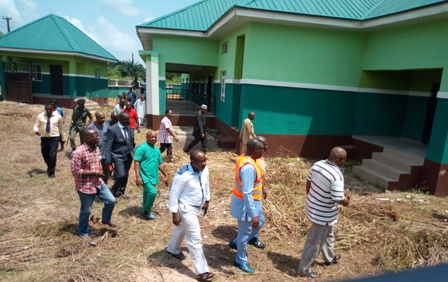 The committee on Monday, October 24, 2017 paid a schedule visit to the IDP Camp, with a view to handing over some complete part of the complex to the Delta state government.
The Commissioner, Bureau for Special Duties, Delta state, Barr. Ernest Ogwezzy together with his team of Delta State Emergency Management Agency (DEMA) Journal by the Ika South Local Council Chairman, Hon. Fred Ofume, some of the Alisimie Community Council of Elders inspected the project to ensure that work on the building is done to specifications for it to be handed over; but this could not go as planned as the beneficiaries and the project committee represented by Mr. John Owoicheo observed minor defects which may take less than three week for the construction company, Davoris Limited to repair.
However, it was observed that the IDP Camp project has started encountering setback as the solar panel and one of the bore-hole pumps have been carted away by hoodlums suspected to be within the area. This however was seen to be given a serious concern even as the presidential committee and the state commissioner appealed to the local government chairman and the community to provide adequate security.
Meanwhile in a show of solidarity to the project, it was announced that the Delta State Governor, Sen. (Dr.) Ifeanyi Okowa has approved the construction of two roads in the community (Alisimie-Alijemata) leading to the IDP camp.
Addressing the press, the Presidential committee representative, Mr. Owoicheo, explained that the camp is to serve as rehabilitation center for victims of flood and other disaster of any kind to provide them with temporal shelter, adding that the camp is been built through donations from concerned Nigerians among other individuals.
He said the project in two complex buildings)would be properly handed over to the Delta state governor when completed but first the completed, part will be handed over partially by the time the minor defects noted during the course of inspection are rectified.
He emphasized the need for adequate security in order to safe guard the properties from any further form of vandalization, informing them that it is the community who stands to gain when development springs up.
Meanwhile he commended the consultant Davoris Ltd for a work well-done and also charged them to make repairs where necessary within the short space of time to enable them handover part of the project to the state government.
The Commissioner, Hon. Barr. Ogwezzy and Hon Fred Ofume in their separate remark thanked the Federal Government for deeming it fit to build the camp in Delta State, particularly in Agbor. They commended the company represented by the Managing Director, Mr. Davidson Oriahi for constructing a state of the art edifice, also lauding Governor Okowa for graciously approving the construction of the community road.
Hon. Fred Ofume further promised to work out plans with the host community to ensure security of the properties with joy that the project which according to him is already functional will bring the local government and the community into world map.