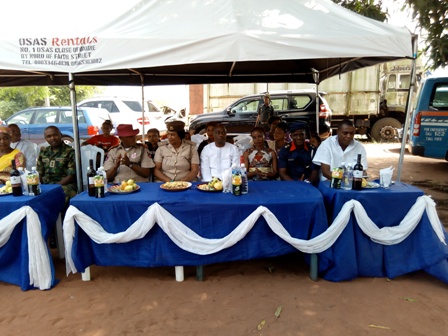 Addressing the newly promoted officers, the Obi of Akumazi, HRM. Henry Ezeagwukpo Jegbefume I, congratulated them and charged them not to relent in their good works, but rather, let their new promotion spur them to greater hardwork.

In an interview, RC. COD Anyibeze who was promoted from the rank of Route Commander (RC) to Senior Route Commander (SRC), said, “I  thank God because only He has made this possible. There are so many of our colleagues who also desired this promotion but were not so lucky, and we pray that they will receive theirs when next opportunity like this comes.

“I am happy for this promotion and definitely, it will reflect in the discharge of my duties because to whom much is given, much is expected. I am presently the Admin Officer in Agbor and Unit Head Accountant. So I am hoping that with more hardwork, I will also climb to the next rank in the nearest possible time.”

Speaking also, the Federal Road Safety Corps Unit and Assistant Corps Commander, Y.D. Bitrus, said, “I congratulate them and wish them well. It is an additional responsibility for them to do more.”

Speaking further, the Federal Road Safety Corps Unit Commander called on all residents of Ika nation, most especially youths to join hands with them to curb crime in the area and ensure safety of lives, saying that with team work, understanding and cooperation, there will be rapid development. He therefore called on the youths of Ika land to give room for interaction between them and the FRSC and desist from acrimony in order to promote understanding among one another.