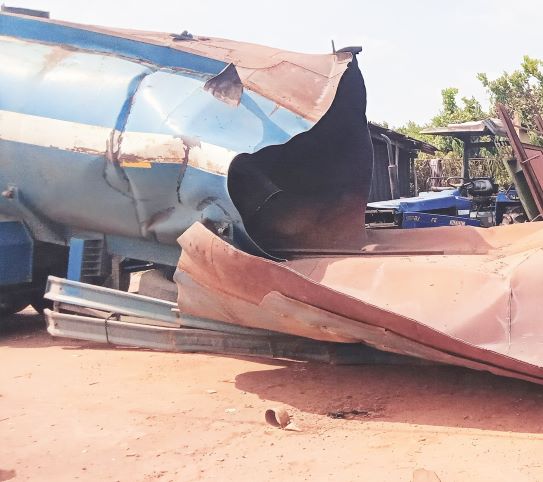 Mr. Nduka was said to have been working on an empty fuel tanker that was brought by one of his customers to his shop.

It was gathered that while working on the fuel tanker on its top, the tanker split up into two with thunderous explosion and threw Mr. Nduka off to the ground with severe injuries on his face and other parts of his body.

It was believed that the thunderous explosion drew the attention of many in the area, and all who knew the welder, and sympathizers who witnessed the sad incident quickly ran to save him.

Arriving at the scene where the incident occurred, there were wailings and lamentation as blood was already oozing out from the body of Mr. Nduka, especially on his face as it was covered with some cloth.

Some of the courageous men at the scene managed to put the victim on a motorcycle and took him to the hospital.

Speaking with Ika Weekly Newspaper reporter, the driver of the fuel tanker, Mr. Samuel Aladebe disclosed that his fuel tanker was leaking at the top which he said needed to be worked on by a welder.

He noted that he explained to the welder, and he told him (driver) to properly park the tanker in his (welder) shop.

The driver, who hails from Anambra State, revealed that he was resting at the shop opposite the shop of the welder when he suddenly heard an explosion, saying that he offloaded three days ago before he came to work on the tanker.

Frowning at the unfortunate incident, Mr. Samuel said the welder is his good friend who has been working for him before the ugly incident occurred.

The fuel tanker with registration number; DELTA AYB-70XA is said to belong to Sako Oil and Gas, Anambra State.

At the time of filing this report, the welder, Mr. Nduka Ogbehebujor had been referred to Federal Medical Centre, Asaba for urgent medical attention.