The bosom friend of late Mr. Glory Ijedinma Nkwor who reported died three days after his wedding, Mr. Jinanwa Onyinye Precious, one of the Media Aides of the Principal Secretary to the Governor, Hon. Hilary Ibegbulem, has described the death of his friend as a mystery which only God can unravel.

According to him, the sickness which took the life of his dear friend, Ijedinma who came from Indonesia not too long ago before his demise, was strange and lasted for just about thirty minutes before claiming his life. 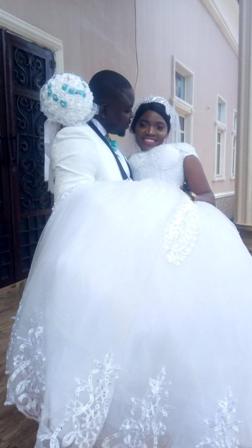 “Physically, I would say he was sick, but only God knows what actually happened to him.  According to his wife, he was complaining of severe headache and fever. So, she had to get some malaria drugs for him, which he took along with a can of stout, and according to the wife, he became relieved.

“Later, Ijedinma Glory’s mother started calling him, and his phone was ringing without him answering. She then called his younger sister who was in the house with him and she went to Ijedinma room to inform him that their mother was trying to speak with him. It was then she discovered that Ijedinma was motionless and she tried waking him up but to no avail. She immediately raised alarm and Ijedinma was rushed to the hospital. It was at the hospital we received a call from his wife informing us of the situation. When the doctor came in, and checked him queried why a corpse was brought to his clinic.

“We immediately left the hospital and took him to Father Dibie programme that was ongoing at the time. The prayer warriors did their best, but he remained lifeless. We also took him to the altar of the church at Igbodo where he wedded a few days before the ugly incidence. The Reverend Father was waiting for us as we had already called him. He also prayed, but all to no avail. So, we had no other option than to take him to the mortuary. That was how we lost our brother, a gem,” he narrated.

Jinanwa also narrated how the deceased passed through difficult situations in life and remained determined and was a blessing to all who came across his way.

His words, “My late friend,  Ijedinma was someone to reckon with. He was very humble and hardworking. When we were together in the village, Igbodo, he was a carpenter and a farmer, and was one of the few youths in the community who tried to better the lives of other people. People went to him for assistance, some to uproot cassavas from his farm to pay later. He never turned them down. He gave people access to his farm. Even when majority failed to pay him for the cassavas, he never harassed them. He was a very kind and simple person. He left Nigeria two years ago for Indonesia in search of greener pastures, and became a staff of a construction company over there.  He also helped a lot of people that were having immigration issues and resident permit in Indonesia.

“Ijedinma’s death is very devastating and will remain a great loss to the people of Ndobu Quarters in Igbodo. Indeed, Igbodo has suffered a very big blow. When he came from Indonesia, a lot of people put up in his house, and the crowd became much that some persons were even becoming uncomfortable with it. But, he was someone that could not chase people away from himself,” he said.

Jinanwa also sympathized with the mother of Ijedinma asking her to take heart, saying that it is the will God, and none can question it. He admonished everyone to be careful as none can discern the heart of anybody.