The Delta State Government under the leadership of Senator (Dr.) Ifeanyi Okowa has inaugurated a new Delta State Independent Electoral Commission (DSIEC) Board.
The newly inaugurated board is headed by Chief Mike Ogbodu; along with him are Mr. Fredrick Oduje Ulakpa, Friday Edmund Seimode, James Eruorhevwameme Umukoro, Gregory Chukwuma Edeme, Light Oritseweyinmi Diden and Mrs. Yvonne Oruevo Wagbatsoma as members after coming out successful at a tensed screening session by the members of the Delta State House of Assembly led by the speaker, Rt. Hon. Sheriff Oborevwori. 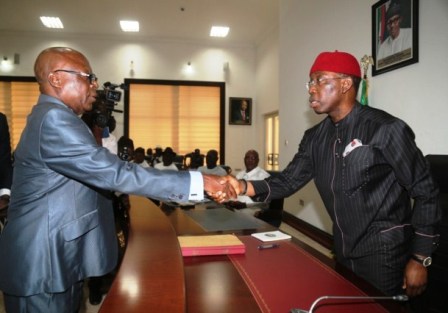 At the Inaugural ceremony, Governor Okowa who earlier nominated the DSIEC members urged them to discharge their duties without fear or favour as Delta electorates are relying on them as an unbiased electoral umpire to conduct a credible free and fair election.
He said their track records revealed them to be trustworthy men and women of uncommon integrity, hence it is required that they live above board to strengthen the transparency expected of the commission in order to serve the people of Delta state irrespective of political parties.
He also charged members of the DSIEC to carry out their functions creditably, especially as the local government chairmen have served for 3 years and their tenure will be expiring at the end of October. Hence, DSIEC have to put all processes in place to be able to conduct a credible election in the next few months
“There is no doubt that our people will need some enlightenment particularly as regards the votes, and there is a need for the membership of the commission to work in harmony, because, it is only then, you can achieve results. Also, neutrality must be exhibited in the discharge of your assigned responsibilities such that all stakeholders in the election process are given equal attention and same quality of service,” Governor Okowa added.
Responding, the chairman of the reconstituted DSIEC Board, Chief Mark Ogbodu, thanked Governor Okowa’s administration for deeming them fit to serve Deltans. He further gave the assurance that his administration will deliver unbiased and impartial service in all election process in the state, adding that they will also be proactive, firm and decisive to conduct generally transparent, credible, free and fair elections.
Prior to the inauguration, Governor Okowa signed into law the new DSIEC Bill to pave way for the conduct of elections into the 25 Local Government Councils in the state.
He also signed two other bills into law which include the Local Government Amendment Bill (2017) and the Administration of Criminal Justice Bill (2016). This according to the legislator is a welcome development aimed at strengthening the activities of DSIEC in order to ensure hitch free electoral processes at the local government level.