The Governor of Delta State, Senator Dr. Ifeanyi Arthur Okowa has on Tuesday 3rd April, 2018, laid the foundation stone of the first Sports University, otherwise known as the STARS University in Sub-Saharan Africa, located at Idumuje-Ugboko in Aniocha North LGA of Delta State. 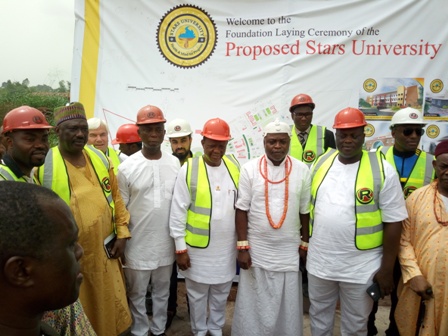 Okowa who inspected the permanent site of the  proposed university, also commended Prince Ned Nwoko for his initiative and focus in seeing his dream of a Sports University materialize in Nigeria. 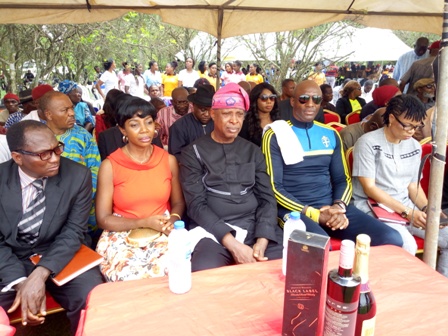 He affirmed that this was the first of its kind, urging all well meaning individuals to support the initiative towards accomplishment and sustainability. 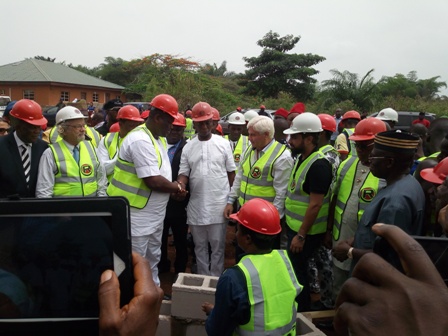 Governor Okowa who was represented by the Commissioner for Higher Education, Engr. Jude Sinebe who was accompanied during the tour of the University’s permanent site by international soccer stars such as Mr. John Fashanu, Chioma Ajunwa and other notable sports legends.

Senator Okowa who spoke on the effort of the state government in building a College of Physical Education at Mosogar, maintained that this Sports University located at Idumuje-Ugboko is the first of its kind in Nigeria. He described it as not only a unique initiative and pride to Delta State but also, that will aid the advancement of academic excellence,  in sport a worthy initiative and the promotion of character and learning.

Meanwhile, the Chairman of the STARS University ground breaking ceremony, Capt. Hosa Okubor, applauded Prince Ned Nwoko for staying true to his dream, stating that when Ned began the journey to have a Sports University established, it was like a joke.

The Chairman however, advised the Delta North people who are the hosts for the university to take advantage of the economic benefits to blossom, maintaining that Ned Nwoko’s desire for setting up the academic citadel in his home town was to productively engage the people and economically empower the communities in Anioma for them to prosper.

According to a football legend, Mr. John Fashanu, “the initiative for the sports university is quite a great phenomenon. What Ned Nwoko has set out to achieve is to provide a level playing ground for everybody in the soccer world, thereby grooming sporting prowess in the youths and creating a lifetime prosperity for as many as value sports and could key into its economic benefits”.

Moreover, the man on the spotlight, the internationally acclaimed humanitarian and initiator of the STARS University, Prince Ned Nwoko gave glory to God for a dream come through. He appreciated everyone that stood by him in his struggle to get the University project started, especially the average Anioma sons and daughters.

According to him, “I have watched Deltans perform excellently in sporting activities in Nigeria and around the world. However, after these sporting exploits, they go back to base without the needed structure to sustain their sporting prowess and breeding the next generation of soccer stars.

I thought it wise to have a full fledged university that can cater for sports in the country, which was hitherto lacking in the entire Sub-Saharan Africa. But to have this dream actualized, I have to factor my community into the project, because of my love for Idumuje-Ugboko and Anioma. I did this to enable my people, the people of the Delta North Senatorial District to become the ultimate beneficiaries. This is the best form of empowerment, this is an everlasting empowerment”, he said.

Meanwhile, from the opinions of sports observers present and that of the members of the Sports University Project Implementation Committee (PIC), the Sports university will open the Anioma area to international fame and recognition in the world of sports. They also affirmed that the academic citadel will not only provide job to the teeming youths of Delta, but would also bring in economic viability in the areas of hostel and hotel accommodations, foreign investments in sports and tourism, commerce and industrialization, and lots more.