SEE ALSO: FULANI HERDSMEN ATTACK: 50 YR OLD FARMER ESCAPES DEATH
Speaking with Ika Weekly reporter, the Head Teacher, Mrs. Esther Agbi said that at about 11 am, while they were in their various classrooms learning the pupils saw one of the Herdsmen standing under the bamboo tree. She noted that when the herdsman noticed that everybody in the classroom has seen him standing under the tree, all of a sudden, he jumped though the fence and ran away. The headmistress added that in less than 30 minutes after the first incident had taken place, pupils in primary two and other classrooms started shouting and that was when they came back for the second time and attacked the primary two teachers, Mrs. Caroline Onyeisi and her pupils.
Continuing, the Head Teacher said immediately after the attack, they had to contact the councilor representing the community Ward Five in Ika North East Legislative Arm on phone of which she rushed to the school immediately but unfortunately, the herdsmen had gone through the broken fence of the school. She appealed to the government to come to the aid of the school. 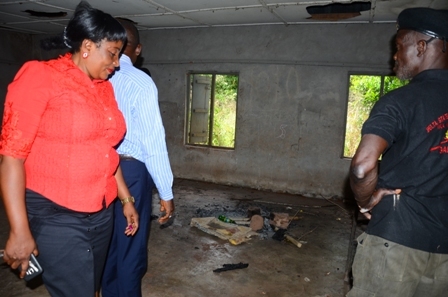 She also called on sons and daughters of the community whom she said have visited the school several times, with promises of demolishing some old classroom blocks and building new ones, to urgently fulfill their promises, as the school is currently facing serious challenges. She pointed out that the school has no building except the two classrooms, the European Union built in collaboration with the Local Government and members of the community some time ago. She added that if the school is well fenced and secured, the herdsmen would not have gained access to attack the staff and pupils. She concluded by stating that there was a time she approached the community and told them that she and her staff needed to plant cassava in some of the vacant lands in the school, but they refused saying that they will build on the land. The head teacher disclosed till today, they have not built on the land which has almost became a forest saying that it is because of the bush that the herdsmen were able to succeed in attacking the school.

While also speaking, the victim, Mrs. Caroline Onyeisi gave thanks to God for sparing her life and that of over 30 pupils in her classroom.
Explaining the actual situation, she said she was in the classroom teaching the pupils; suddenly some Herdsmen walked in and told them to raise their hands up. She disclosed that all they did was nothing but to pick up her hand bag, containing some huge amount of money A.T.M card, handsets, National identify card, voter’s card and other valuable items escaped through the fence.
A young man who lives close to the school on the condition of anonymity stated that he had failed in his efforts made to eject the herdsmen out of the school compound. According to him, “I stopped chasing the herdsmen in order for them not to shoot me with the arrow in their hands since the government and the stakeholders in the community have overlooked their presence in the school compound. A walk around the school compound one will agree with me that herdsmen had not only turned the Okuwe Primary into a grazing ground but also used the classrooms as shelter. One of the classrooms had equally been turned into kitchen as they set firewood to cook in there”.
Our source went further to decry the deplorable state of the school building and the fallen fences which the herdsmen used as entrance into the school.
Some of the teachers who did not want their names mentioned, lamented that the staff and pupils of the school have been subjected to deplorable conditions for a very long period, appealing to government to rescue the situation.
As at the time of filing this report, the Police from Owa-Oyibu Police station were already at the scene to carry out investigations.