In a bid to create an orderly local government devoid of gridlocks caused by random parking of vehicles on the way, Hon. Victor Ebonka, Ika North East Chairman has inspected the proposed site being prepared as the alternative park for the local government. 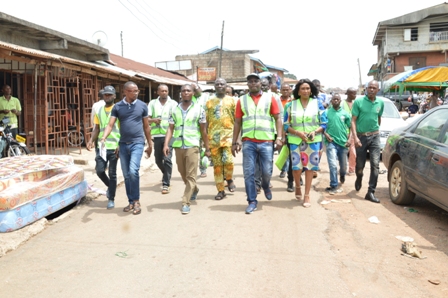 The inspection which took place recently in company of the vice chairman, Hon. Mrs. Collina Anazia, and some senior staff of the council was done in order to get the site ready for use.

Hon Ebonka noted that the proposed park will help in decongesting traffic  on busy roads close to the garage market such as: Abraka road, Dorothy street, Oranu street and Hausa street, axis. He stated that, on completion, the site will accommodate motors, motorcycles and  tricycles .

Victor Ebonka said their decision to clear the site which was a jungle before now, was informed by the lawless and random parking motors and motorcycles, which leads to traffic, disorderliness and accidents. He revealed that a committee will be commissioned to ensure that the roads are cleared and the car park is put to use, when it is completed.

Victor Ebonka further revealed that he is determined to ensure a clean, orderly and traffic free local government. He warned that no vehicle will be allowed to park along the streets within the axis mentioned, saying that defaulters will be dealt with accordingly.