HOODLUMS SET BUILDING ON FIRE, AFTER THREAT TO LANDLADY

Speaking to newsmen on the scene, the Landlady of the house that was set ablaze, Ms. Pauline Akpokiniovo Ogene disclosed that just after midnight on Monday May 3, 2021; the day before the incident, some hoodlums broke her window, pointed a torchlight and gun at her, demanding that she hands over her phone and other valuables to them, threatening to burn down the building with her inside if she fails to heed to their demand.

Speaking further, Mrs. Oghene stated that she had to escape to a part of the house where they could not reach or see her and placed a distress call to some of her tenants who have shops in the building saying she was the only resident in the house as other apartments were rented for commercial purposes. According to her, one of her tenants that night came with some members of a vigilante group and upon the arrival of the vigilante men, the hoodlums ran away.

The Landlady disclosed that because of the threat from the hoodlums, she did not sleep in her house but went to her sister’s place to pass the night. And around 5am of Tuesday May 4, she received a call that her house was on fire.

The victim lamented that she has lost all her valuables to the fire.

On his part, one of the tenants in the building, Pastor David Igwe, revealed that in the early hours of Tuesday, he received a distress call from his Landlady, informing him that some hoodlums were at the house threatening her to open the door or risk being burnt alive. He said he immediately swung into action by calling the Police but noted sadly that the Police told him that it was late already and they cannot make it.

Pst. Igwe narrated that he also put a call across to one of the vigilante groups but they told him they are far away, but luckily according to him, as he was rushing to the scene, he met with some vigilante men whom he informed of the situation and they followed him in response to the Landlady’s distress call and upon arriving the scene, the hoodlums ran away.

He noted that he was shocked when he got the call that the building was on fire, explaining that he has over four hundred and fifty birds in the building and some bags of fowl feed which he bought the previous day. 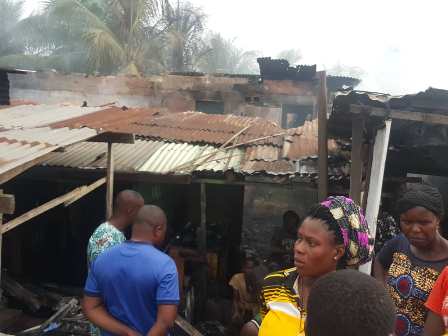 He pointed out that he initially thought the hoodlums were joking when the Landlady told him that they threatened to burn down the place when she refused to do bidding.

Another victim, Mr. Uche Okorie, who spoke to newsmen, said that was how his own part of the building was set on fire about two weeks ago; and all his phones and phone accessories burnt to ashes, according to him.

The victims appealed to the Local and state governments, Non Governmental Organisations, religious bodies to come to their aid as they have lost their source of livelihood.