The Executive and members of Hostcom Delta North during the week paid the Honourable Commissioner for Basic and Secondary Education Delta State, Barrister Chiedu Ebie, a courtesy visit at his office in Asaba, Delta State. 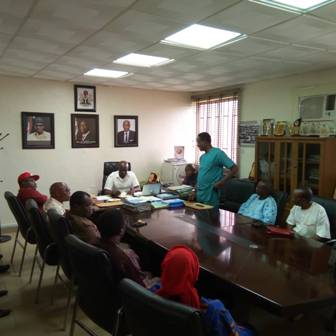 In the course of their discussions, Bar. Ebie while welcoming the delegates commended the Executive of Delta North Hostcom and advised the group to inquire as to why Pan Ocean has not started production, urging them to interact with the management. The Commissioner on his part assured them that he will do his best to ensure that the company starts production for the benefit of Ika nation.
Honourable Chiedu Ebie, commended the Executive of Hostcom for all they have been doing to ensure that Ika land is listed as an oil producing region, and urged them to carry out their activities within the ambit of the law.
In their separate remarks, the Chairman of the group, Chief Greg Dike Onah and the Publicity Secretary, Hon. Okafor Wallace went down memory lane to chronicle the activities of Hostcom in Ika land and frowned at the activities of Pan Ocean, urging the commissioner to synergize with other stakeholders in Ika Land to meet with Pan Ocean in order to ensure that they start production so that Ika land can benefit from the 13percent oil derivation and get a representative as a commissioner in DESOPADEC.
Some others present at the meeting were; the Honourable Commissioner, Barr. Chiedu Ebie, Mr. Edozie, Chief Greg Onah (Chairman), Mr. Ben Moseri (Secretary Anioma Hostcom), Mr. Eze Lawrence (chairman Ika Ethnic), Hon. Uyanwanne, Hon. Okafor Wallace, Chief Ewere Eluebo, Chief (Mrs.) Mercy Ashibuogu, Elder Sunny Onyibe, Prince Innocent Obaseki amongst others.

0Shares
0 0
Share
Previous REFLECTION: IT IS TIME TO MAKE SOME CHANGES
Next OGADI PRESENTS EBONKA AS CHAIRMANSHIP CANDIDATE