I AM FULFILLED, HALE, HEARTY AT 84, Says Owa Monarch

I AM FULFILLED, HALE AND HEARTY AT 84 – Owa Monarch 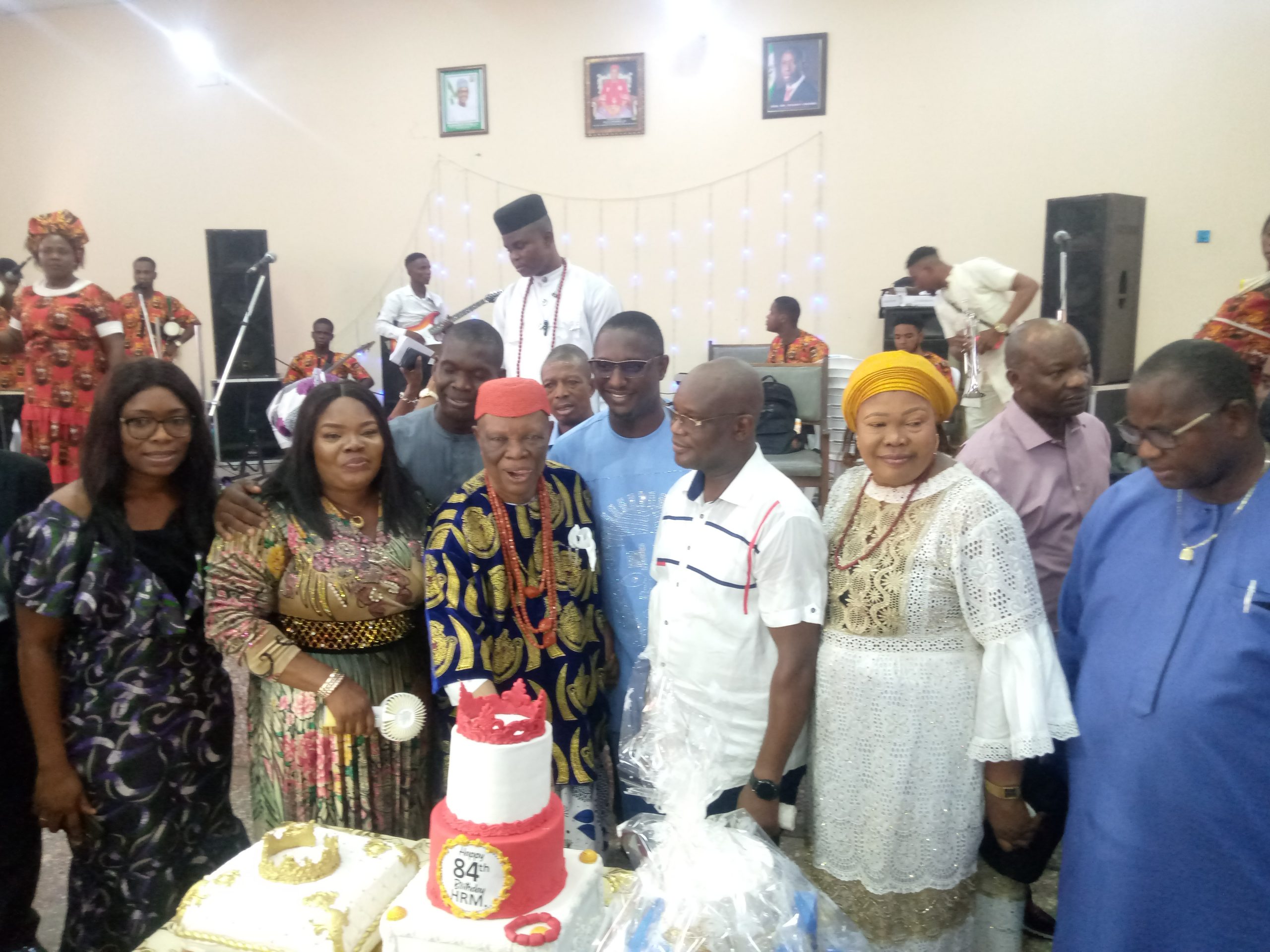 The birthday anniversary which took place at the Palace of His Royal Majesty in Owa-Oyibu, was attended by many royal fathers in Delta State, such as the Obi of Okala kingdom, the Enogie of Igwuebe, in Edo State, the Queen Mother of Agbor kingdom, Queen Victoria Ikenchukwu, Chiefs, prominent sons and daughters of Ika nation and others. All the Obis in Ika Northeast were also present. Commissioner for information, Hon. Charles Anyagwu, Hon. Ifeanyi Eboigbe, Chief Barr. Frank Onyisi Nwugo, Hon. Emeke Asiwe and other top stakeholders in Delta State along with the representatives of His Excellency, Sen. Dr. Ifeanyi Okowa.

Ministering the word of God during the ceremony, the Bishop of Ika Anglican Communion, Rt. Rev. Geoffrey Ifeanyichukwu Ekpenisi said the life of the Obi has been a successful one as he has handed his life to God. He also noted that the reason why Dr. Emmanuel Efeizomor is healthy, great and looking younger on daily basis, is because of his good works and the fear of God in his life.

Speaking further, he stressed that the monarch was sent to bring light, peace and development to Owa Kingdom, just as the same God also used Abraham to give life the whole world. He admonished Christians to shun any act that could pull them away from God and embrace God as that is the only way to live a successful and happy life. He stated that for Owa Kingdom to have Senator Ifeanyi Okowa as Governor of Delta State, is one of the evidence of achievements and successes recorded by Owa Monarch.

Speaking during the event, the celebrant, His Royal Majesty, Dr. Emmanuel Efeizomor appreciated God for His grace and mercy upon his life. He thanked all who graced the occasion and wished them long life and prosperity.

Continuing, the Obi also thanked Sen. Ifeanyi Okowa, the Governor of Delta State for his love and support for him, his kingdom and all Traditional Rulers in Delta State. He prayed God to continue to bless him with all his heart desires as he continues to join hands with him to develop Owa Kingdom.

Those who spoke to Ika Weekly Newspaper Reporter shortly after the event, were Chief Frank Onyisi Nwugo, the Chairman, Revenue Monitoring, Tracking and Audit of Delta State, Hon. Charles Anyagwu, Chief Ifeanyi Oyibo, the Ugonchukwutumeonye of Owa Kingdom, Chief John Onwubuya, the Ojezuwa of Owa Kingdom, Chief Ozioma Goddey, the Ezenwali of Owa Kingdom, Mr. Anwuilika Alika, aka Area Bigman, Mr. Godwin Ajakpa and others. In their remarks, they congratulated the Obi on his 84th birthday anniversary and wished him more years of peace, long life and prosperity.

Continuing, they described him as an Epitome of peace and a symbol of unity and success. They therefore wished him many more years of celebrations.

Prince Garuba Efeizomor, Princess Ezinne Patricia Chiedu Efeizomor, Prince Bright Efeizomor were amongst the children and family members of the Obi who also congratulated their father. They and prayed God to continue to sustain his life to celebrate many more birthdays ahead.

Share
Previous I OVERCAME DEATH AS FLOOD SWEPT ME INTO OROGODO RIVER- Victim
Next DTHA 2023; I HAVE WHAT IT TAKES TO GIVE QUALITY REPRESENTATION-Festus Ofume