I REPEAT, UMUNEDE WILL NOT GO BACK TO EGYPT! -Umunede Monarch 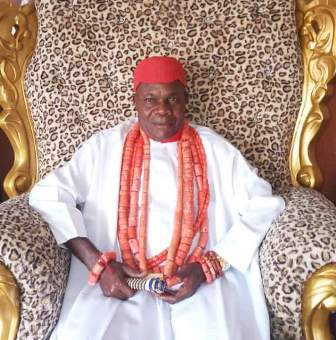 His Royal Majesty, Ezeagwu Ezenwali I Agadagidi (JP), the Obi of Umunede kingdom has in an address to his Chiefs in Council, reiterated his stand not to lead his subjects, the people of Umunede Kingdom back to bondage. He stated this on Tuesday 29th January 2019 at his Royal palace in Umunede, while congratulating His Excellency Governor Ifeanyi Okowa on his award as the Vanguard and Independent Newspapers Man of the Year for his tremendous developmental strides across the State.

According to the monarch, “My number one goal as the Royal Father to the people of Umunede kingdom is to see to the peace and development of the land. This is uppermost in my heart and is my daily concern. I will forever lead my people forward and shield them from any obstacle that poses as a hindrance to their development and joy in whatever form it takes. This stand has informed my support for Governor Okowa led administration, for the continual development of Umunede kingdom.”The monarch made it bare to the people of Umunede that they are experiencing good things from Okowa’s administration which they never had before.

Going further, he said, “I did not ask anybody not to vote for any other political party of their choice, but what I am saying is that it is more beneficial for us to stick to what is already profiting us. I repeat, Umunede will not go back to Egypt! We need progress, we need continuity of these developmental strides through the reelection of Governor Okowa come 3rdof March.”

Chief Benson Okeychukwu Iyama, the Elemah of Umunede kingdom and Chairman, Umunede Traditional Council, on behalf of the chiefs, said, “we are standing behind our King, because he is a noble monarch known, recognized and respected by numerous persons from different places.” He pointed out that from 1999 to 2015; we had been neglected, but, now with God on their side, through the help of His Excellency, Governor Okowa, and “our son in the State House of Assembly, Hon. Tony Elekeokwuri.” Going further, he said, “We can only appreciate the Governor by supporting his reelection for him to be able to do more for us.”He also said that Governor Okowa loves Umunede kingdom and for that, they are behind him, and congratulate him on the award given to him. He therefore prayed God to give him victory at the polls.