The father of the Delta State Governor, Chief Pa. Arthur Okowa has stated that he has concluded with God, the Creator of the universe that he will live to see his son, the Governor of Delta State, Senator Dr. Ifeanyi Arthur Okowa being sworn-in as the president, Federal Republic of Nigeria. 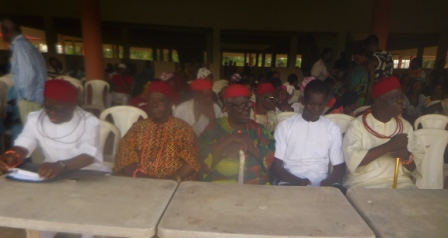 He stated this on Tuesday October 30, 2018 while speaking during the official opening ceremony of Owa-Alero Ultra Modern Market in Owa-Alero in Ika North East local Government Area of Delta State. Read also: HELP US MOVE TO THE NEW MARKET &#8211; Market Women Plead

Speaking further, Pa Okowa disclosed that his son, Ifeanyi is destined by God to rule  the world and be a divine blessing to his generation. He said the Governor became interested in politics some years ago, when both of them as father and son went to an Inter-House Sport programme. He added that on their way to honour the invitation, the Governor stopped and bought a gift for the winning team and presented it to them after the event to encourage them to do more.

In his words, “With that single effort, having seen how my son’s gift to the winners of the Athletic competition was highly appreciated by both the students and staff of the school, I called him and said my son, if you should continue in this manner, I strongly believe it will help you in life. That was how he started and fully ventured into active politics,” he said. He therefore encouraged parents to train their children in a godly way and ensure that they acquire educational knowledge as it is the best knowledge, anyone can acquire that can bring wisdom, understanding and riches in life.

0Shares
0 0
Share
Previous THE INCREASING INSECURITY OF BANKS’ CUSTOMERS IN NIGERIA
Next AM CONTENTED WITH WHATEVER I HAVE – Chief Ezinne Mrs. Nwaebo