I WOKE UP TO SEE OWL ON MY BED-Evang Azubuike 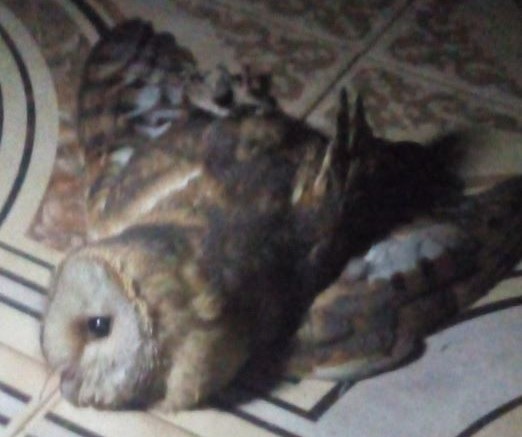 I WOKE UP TO SEE OWL ON MY BED-Evang. James Azubuike

-To my greatest surprise, the evil bird fought me

The founder, Hope in God Foundation with head office in Umunede, Ika North East Local Government Area, Evang. James Azubuike has narrated how he woke up to see an Owl on his bed.

Evang. Azubuike who is the head and oldest member of the congregation of Bride of Jesus Ministry Umunede said he has come to the public to testify of how God saved his life again.

According to him, “It was about 1 am on Sunday, December 4, 2022 while I was sleeping that I had a terrible dream where I was fighting with a strange animal, but it became shocking thing to me that what appeared as a dream was now a reality as I woke up to see an Owl on my bed.

“At first when I woke up, I was very restless and sluggish to stand up from bed. While wondering over the nature of the dream, I reached out to my phone beside my bed and switched the torchlight on only to see an Owl on my bed.

“To my greatest surprise, the Owl immediately flew to perch on my head and I dodged it. Picking a broom, I continued to hit it to prevent its fingers from perching on my head.

“It was when I shouted the name-Christ that I realized that what appeared as a dream was now a physical battle. My further shout for help woke two of my children who came to my rescue, but unfortunately, the door to my room was locked.

“The battle became tougher when the broom I held fell off my hand and I had to use my bedspread as protection. I managed to use one hand to open the door but I asked my children not to come in but get me a harder object to fight with. I fought shouting the name of Christ and I was able to hit the owl very hard and it fell. Immediately, I rush to pin it to the ground until it died.

“It was not really a battle one could imagine, but God saw me through that I overcame and I am alive, hale and hearty to tell the story. Indeed, I return all glory to God for saving me”.

Continuing, Evang. Azubuike said some people died in their sleep as a result of such encounter, but God saved him and the victory is a testimony of the fact he the Lord has power over all things. He concluded by stating that he thought he has no enemy, appealing to any who feels he has wronged them for the sake of God to forgive him and stop wasting time looking for ways to kill him because his life is in the hand of God.