Some delegates of Igbo Community in Umunede Kingdom in Ika North East Local Government Area of Delta State, on Saturday July 18, 2020 paid a courtesy visit to Umunede Monarch in his palace over the murder of their son, late Mr. Ezeji Sopuruchi who was shot dead on Friday July 10, 2020 during the community’s annual Igwe festival.

Speaking during the visit, the spokesman of the Igbo Community , Mr. Asika Gabriel appreciated the monarch for his warm reception, stating that their reason for the visit was to ascertain the efforts the community has made towards apprehending the person that murdered their son. He pointed out that the gruesome murder of Ezeji Sopuruchi was indeed a big blow to them.

Responding, HRM Dr. Ezeagwu Ezenwali I (JP) condoled with the Igbo Community and the entire family of Ezeji over the death of their son. He disclosed that the demise of Sopuruchi was not only a big blow to Igbo community, but also a great loss to the entire kingdom of Umunede. He stressed that late Sopuruchi was a good son to him and a hardworking boy who was known for good works, adding that Sopuruchi was never a cultist. 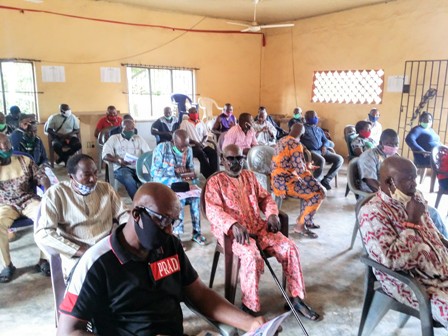 While confirming that the Police are on top of the situation, the royal father called on anyone who might have information on the whereabouts of the culprit to report to the police.

The traditional ruler of Umunede Kingdom in Ika North East L.G.A of Delta State, HRM Dr. Ezeagwu Ezenwali I (JP), on Tuesday July 14, 2020 played host to the new commander of the Agbor Area Command, Asp Ime Udofia and his entourage who were on a familiarization visit, at his palace.               Receiving the Agbor commander, HRM Dr Ezegwu Ezenwali I (JP) said he had demonstrated traits of good leadership by the visit. He therefore assured him of maximum support of Umunede Kingdom in combating the incessant occurrences of kidnapping and other crimes in Ika Nation.