Members of Igbodo Big Brothers Association in Ika North East Local Government Area of Delta State were recently in a joyful mood as they celebrated their one year anniversary and also donated notebooks to Igbodo Comprehensive High School in Igbodo kingdom. 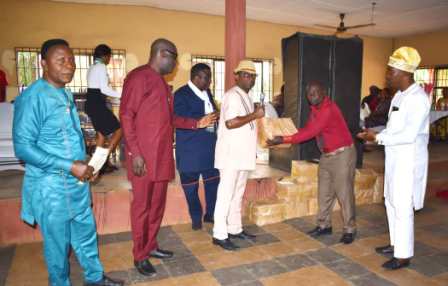 The event which attracted men and women including the youths in the community was held at Ndobu community town hall and people were lavishly entertained with good meals, drinks, and were thrilled by a live band.

In his opening speech, the chairman of the occasion, Mr. Austin Iyashere thanked Big Brothers Association for deeming it necessary to contribute to the growth and development of Igbodo kingdom, especially in the area of education. He disclosed that the coming together of members of the Association is one of the ways to unite sons and daughters of Igbodo kingdom, saying that with same unity and vision, they will help transform the community. Mr. Iyashere stressed that there is need to have a platform of all sons and daughters of Igbodo kingdom for a better tomorrow.

On his part, the President of Igbodo Big Brothers Association, Mr. Emeke Offor, in his keynote address stated that the Association is a group formed by age mates and friends whose vision is to bring progress and unity into Igbodo kingdom. Itemizing the mission of the Association, the President said they are out to support the community development of Igbodo kingdom and foster unity among indigenes of the community. He added that the Association is formed to support the educational pursuit of Igbodo youths which according to him is the best they can give to their children whom he described as leaders of tomorrow.

While stressing that the Association will give out scholarship to students of Igbodo indigenes, Mr. Offor pointed out that they will also support the youths development and skill acquisition programmes, saying that everyone must not go to school.

Receiving the donated notebooks, the vice principal of Igbodo Comprehensive High School Mr. Osemene Christopher, expressed gratitude to Big Brothers Association for their generosity, saying that they have greatly done well. He stated that illustrious sons and daughters of Igbodo both home and abroad have contributed immensely to the growth and development of schools in Igbodo. Mr.Christopher called on others who are yet to contribute their quota to the progress of Igbodo Kingdom to come home and do their part.

Speaking to Ika Weekly Newspaper reporter shortly after the event, the Vice President of the Association, Mr. Samuel Aghomie, and the General Secretary, Mr. Ozor Henry Ekene, in their respective remarks stated that Igbodo Big Brothers Association has good objectives for Igbodo kingdom, stressing that one of their priorities is to improve schools in the community.

According to them, “Every community needs positive gathering and progressive attitude. We must say no to crime. We are out to support and encourage the youths who are yet to know what life is all about. The youths must listen to the good advice of their parents for a better society.

There are many projects lined up and before the end of this year, some of them will be commissioned.” The duo enjoined other sons and daughters of Igbodo both home and abroad to strive towards making the community one of the best among other communities.