Some Igbodo indigenes have claimed that the recent Igbodo flood in the community was not caused by rain but as a result of the overflowing of Omelebele River which has never been experienced.

Residents who spoke on the condition of anonymity, said they have never seen such incident happen in the community. From speculations, they claimed that the water  coming out from the ground and very clean and as such couldn’t be flood water.

In their words, “The Omelebele River is at the same spot the incident happened. From history, we learnt that the river goddess has requested a human sacrifice of  albino and seven white dogs but unfortunately, the request was not met . Ever since, the Omelebele River has remained in its small place under a big tree until recently, when the tree was cut down. The two persons that fell the tree did not find it easy as one is dead and the other seriously ill. With this, we have concluded that the Omelebele River goddess is angry hence, it overflowed its shores”, they said. 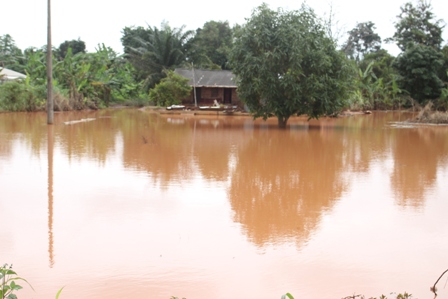 But others, who did not believe the mythology, said that the claims could be taken seriously only when they see water in the area during dry season and not in the rainy season.

In a phone call interview, Igbodo monarch, His Royal Majesty Barr. Ikechukwu Nkeobikwu Osedume 1, said they are yet to accept the story about Omelebele River that was told by their forefathers. He said the situation would be under God’s control.

The monarch made the call when the L.G.A Council Chairman, Hon. Bar. Victor Ebonka visited the community on Tuesday, July 30, 2019 to inspect the flooded areas. According to him, “I am not happy that my subjects in Idumu Uzo Obior, Igbodo are now rendered homeless by flood. It is really heart aching. I know that some areas in my community are erosion prone but not to be compared with the recent unimaginable flooding. From calculations, it seems the roads and drains recently constructed in some towns around Igbodo, including Umunede, Akumazi, Ekwuoma and Onicha Ugbo axis must have added to the overflow of flood as the waters from these areas seem to find their ways to Igbodo which is in a valley. Before now, we have never experienced such heavy flooding”, he stated.

Obi Osedume said that ecologist from the Delta State Emergency Management Agency has visited the flooded areas, appealed that urgent proactive measures would be taken before the situation gets out of hands.

Responding, Hon. Victor Ebonka said the flooding is beyond what the council can handle and promised to meet immediately with the State agencies concerned to procure a lasting solution.

It was indeed a nightmare in Igbodo in Ika North East L.G.A of Delta State, as part of Idumu Ozei Quarters was submerged in flood, rendering many residents homeless. The frightful incident which occurred last week after a prolonged heavy rain fall was described by many as strange and unprecedented.

When Ika Weekly reporter visited the scene, many houses and farmlands were  covered by water and the occupants of the affected areas were also  scurrying for safety and carrying some of  their belongings on their heads.

Speaking to one of the occupants of an affected house, Pastor Owoyemi Oloruntoba David expressed shock and sadness over the situation, saying that most of his valued properties have been damaged. He thanked God for saving his life and those of his wife and children.

Asked what could be the cause of the flood, Pastor David attributed it to rain water coming from Ekwuoma and Obior. The man of God appealed to the Government and all well to do individuals to come to their aid. 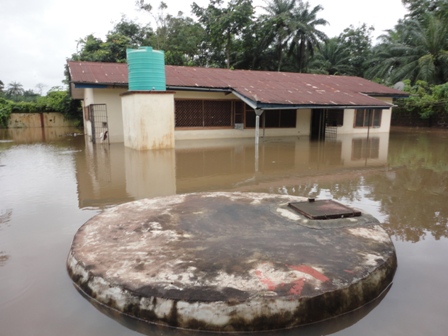 Another resident who gave his name as Kelechi said, “Flood has taken over our house. There is no place for us to stay. This is the first time we are experiencing this incident. We tried our best to move some of our properties but couldn’t, as such, some of them like television, bed, Kitchen equipment were lost to the flood. The Government should come and help us”.

Also speaking, Mr. Israel Okolie said, “According to history, this water came out from the ground from a small river called Omenebere. It is this river that flowed into the affected areas. Government should assist those whose houses and farmlands were destroyed”.

Ika Weekly gathered that some of the residents claimed that the heavy flooding was because someone cut down a particular tree which is believed to be the source of the small river (Omenebere).

In a bid to unravel the situation, Ika Weekly visited the palace, the traditional ruler of the community, HRM, Obi Ikechukwu Osedume I, declined any comment, saying that he was in a shock and in a meeting with the elders of the community.