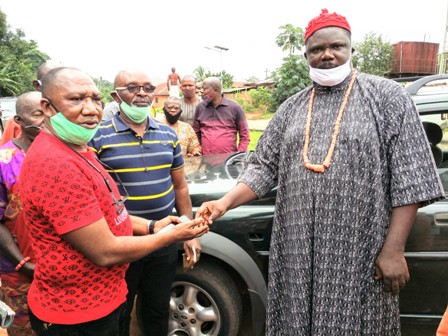 The Officer in charge of the State Anti-Robbery Squad (SARS), Chief Superintendent of Police, Masoyi Dadi with his entourage, and the DPO of Igbodo Police Station SP Ogbodu Isaac, on Monday August 3rd, 2020 visited Igbodo Palace in Ika North East L.G.A of Delta State following the siting of a new SARS office in Igbodo Kingdom.

The joy of the Monarch and the entire people of Igbodo Kingdom knew no bound as the new development unfolded.

Welcoming the SARS boss and his entourage to his palace, HRM Barr. Ikechukwu Nkeobikwu Osedume I thanked them for coming to Igbodo Kingdom, saying that their presence in Igbodo will help in curbing crime and will also enhance the relationship between the Police Force and Igbodo Community. He assured them of maximum assistance towards their work in Igbodo.

According to the Monarch, “As part of our support to see that your stay at Igbodo is easy and effective, we were able to put up an accommodation where your officers will be staying. We have also provided mattresses and pillows for their relaxation and other items in the house for their comfort.

Also, for mobility we were able to provide a car to support the SARS team. We hope these will help the SARS team in carrying out their task effectively. Subsequently, whatever assistance or service you feel we can render as a community, do not hesitate to tell us, we will be glad to help. We thank you for coming and accepting to render your services to Igbodo and its environs.

Responding, the SARS commander, CSP Masoyi Dadi appreciated the Monarch for giving them a warm reception, saying that he was grateful and delighted to be in Igbodo. He noted that before now, he has been coming to Igbodo and its environs for assignment though they never had the opportunity to gather together.

CSP Dadi disclosed that they heard the cry of Igbodo people through one of their sons, Mr. Chris Ubani, whom he said he has never met before.

In his words, “We are here to assist in fighting crime in Igbodo and its environs. The SARS team has been trained, but at the same time, no man is perfect. It is only God.

Today, I have come with a team of SARS. They can only function well with your assistance and cooperation. Through vital information, they will be able to sanitize this community and I believe they will get the needed support from the people. You should embrace and admonish them whenever they go astray. They are your children. Give them vital information that will help them eradicate crime in Igbodo Kingdom. Indeed, people will know that you have additional team of police officers”.

Beaming with smile, a member of Obi in Council, Hon. Steve Eghen assured CSP Masoyi Dadi and his men of the people’s support and co-operation, saying that Igbodo Kingdom is grateful to them.

Speaking to newsmen shortly after the occasion, the acting President General of Igbodo, worldwide, Mr. Igah Peter said he was grateful for the new development in Igbodo Kingdom. He disclosed that Igbodo sons and daughters living abroad are making them proud, saying that they are providing the basics needs for of the community. Mr. Peter urged others who are yet to contribute their quota to do so and ensure that Igbodo kingdom moves to another level.