Prior to the presentation of scholarships to the six deserving students, the I.G.S. 1993 set (an association of former students of Ika Grammar School that graduated in the year-1993), had completely renovated a previously dilapidated building in the school, consisting of several classrooms, a staff room and several offices. 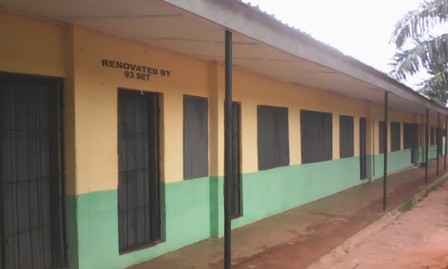 Members of the Ika Grammar School Committee, and also I.G.S. Old Boys of the 1993 Set, who were on ground to present the scholarships to the students were: Mr. Donatus Meye, Mr. Jude Obuh, Mr. Chuks Etunim, Mr. Kingsley Onwuaduegbo and Mr. Felix Okwuogori.

Addressing the students, Mr. Meye Donatus said: “We, the Ika Grammar School old boys of the 1993 set, decided to award scholarships to hardworking students and to renovate the block of classrooms, as a way of giving back to our alma mater

“We hope that our benevolent gesture will make great impacts in your lives. This is just the beginning of our good works, as we hope to do more for this school. The aim of this scheme is to encourage you students to be industrious and to reduce your parent’s burden by taking care of your school fees.

“Nevertheless, to whom much is given, much is expected and to whom nothing is given, something is expected. Those who have received the scholarships should continue to work very hard academically, while those who have not gotten should study hard, so that they can join the group of scholars”.

The principal of the school, Ven. C. Omo Okunbor, thanked the Old Boys, for their humanitarian gesture, urging them to continue to do more for the school in any way they can.

His words: “Since I became the principal of this school, the I.G.S. 1993 set have done a lot for this school. I pray that God will replenish and increase their pockets, so that they can carry on the good work. On behalf of this school, I am saying a big thank you to them and God bless for all they have done”.

On their part, the recipient of the scholarships thanked them for their kind gesture towards them in particular and to the school at large. They stated that they intend to work even harder at their studies to show their appreciation for the scholarship. Furthermore, they urged their fellow students to believe in themselves and to be zealous in their academic work, so that they can receive scholarships as well.

In a brief interview with an Ika Weekly Newspaper Reporter, Mr. Meye Donatus, talked about the rationale for the formation of the Ika Grammar School 1993 set old boys association, as well as the reason for their altruistic gestures towards their alma mater.

He said: “The formation of the I.G.S. 1993 Set was the brain child of Mr. Igboanugo Ebele, who is also the Chairman of this group. Mr. Ebele, in his wisdom, was able to re-establish contact with us, thus bringing all of us back together as one.

“Looking at Ika Grammar School, we are angered at the fact that it is not what it used to be. The building (structures) are wearing out, and the population has seriously dwindled. As a result of these facts, we decided to embark on these projects, to do what we can, in order to improve the school’s status quo.

“This school, indeed, made great impacts in our lives. As a result, we have decided to contribute our quota to the school. Therefore, we are urging other old boys of Ika Grammar School, as well as illustrious sons and daughters of Ika Land, to emulate our actions. If all the old boys of Ika Grammar School join hands together as one, we can definitely revitalize the school and restore it to its past