The inauguration of the marshals who have been saddled with the responsibility of enforcing cleanliness in Ika North East took place at Owa-Oyibu, the headquarters of the local government recently. 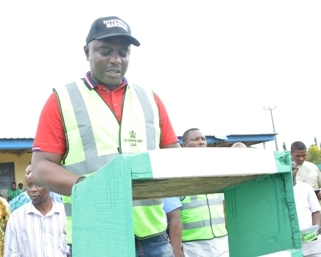 Addressing the marshals, Hon. Ebonka stated that the inauguration is also in line with the United Nations global initiative to synergize with citizens who generate refuse, the government and Private Sector Participants (PSP) with a view to revolutionizing refuse management for a cleaner and healthier environment.

According to him, the marshals are to enforce, and abide strictly by the environmental laws of the State government and Local government Bye-Law on Environmental Sanitation in the discharge of their duties.

In furtherance, he stated that they are to prevent dumping of refuse in drainages and unauthorized locations; ensure that every household has waste disposals made available by the state government; each household is registered with a Private Sector Participant; checkmate indiscriminate washing of cars, motorcycles, amongst other job description. He also charged them on competence, saying that, that is the bain of his government.

Hon. Ebonka however warned the marshals to avoid engaging in unlawful practices which is not within the law, stating that anyone found in any unlawful act will be dealt with accordingly.

Also speaking to the marshals, Chief. A. Dikenwosi, Chairman of Landlords Association, Ika North East, emphasized that Ika North East in time past was ranked amongst the neatest local government.

Putting the marshals to practical test, Hon. Ebonka led them to a cleanup exercise at the main market and its environs after the inauguration.

The committee is led by Comrade Okonkwor Dennis, and the secretary is Mrs. Onwusuya, HOD Health, Ika North East.