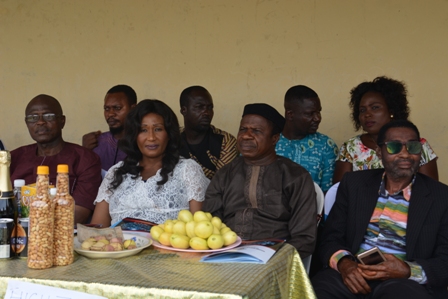 Presenting an address, the local government NULGE Chairman Comr. Corliss Azikiwe stated that Ika North East NULGE has been known amongst its pairs for it project driven initiative that has brought positive bearings to lives of members.

Stressing that the union is open to dialogue, he stated that their hitherto dilapidated secretariat building was given a face lift through dialogue with the then transition committee Chairman, Princess Ijenwa Okwunonke .

Going further, he asserted that despite the financial challenges, the union and the management of the council have been able to “Squeeze water out of stone to pay salaries”. The HPM of the council commended NULGE for their warm reception towards him on his resumption at the local government, proving a motion for tenure for the Executive of the Union. He applauded them for their cordial disposition towards the government in power, saying that they are ready to work with the union.

Representing Hon. (Barr.) Victor Ebonka, the Vice Chairman of the Council, Hon. Mrs. Council Anazia, congratulating the retirees and the awardees, stated that having an award is no mean feat, while calling on other staff still in service to emulate the retirees and set a good precedent for others to follow.

The State NULGE Chairman, Comr. Zico Osejindu Okwudi expressed his gratitude to the Local Government Executive of the union for finding him worthy of such an award.

He affirmed his commitment and dedication towards working for the welfare of local government staff round the state. He called on the union at the National level to awake to duty, as they cannot act without adequate backing from the National level.

He said the union is lucky to have an open governor in the person of Sen. Dr. Ifeanyi Okowa who listens and dialogues with workers, rather than employ drastic measures like his colleagues in some other states.

Speaking on the arrears and backlogs of salaries owed workers, he said they will be paid as soon as the state receives her Paris refund. He encouraged members of the union to remain resolute in their struggle, stressing that their power is in their numbers. He disclosed that Delta State is amongst the highest paying states in the federation. He particularly commended the Comr. Corlis Azikiwe led Executive for  putting the event together to honour retirees, describing it as a welcome development even in the face of financial challenges faced by the union.

Those honoured with awards of excellence were: Comr. Zico Okwudi, Comr. Sir. C. A. Aghara, former HPM, Ika North East and Comr. J. I. Monye, former NULGE Chairman Ika North East. A total of 21 retirees were recognized and honoured for their meritorious service to the local government.

0Shares
0 0
Share
Previous 2019 ELECTION : REASONS THE YOUTHS MAY NOT MAKE IMPACT
Next I WILL NOT FAIL AS IKA NORTH EAST COUNCIL CHAIRMAN