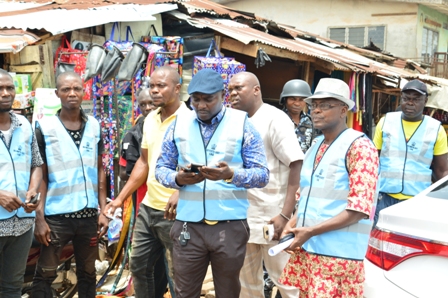 Inaugurating the task force, Hon. Ebonka congratulated them for being part of the agents of developments in the local government and charged them to be committed in the discharge of their duties. He noted that the inauguration is in line with the present administration’s policy on ensuring good governance, free flow of traffic and proper parking of vehicles and motorcycles in Boji-Boji, urban as well as to put a stop to driving against traffic.

Speaking further, he  disclosed that the taskforce on authorized parking is saddled with removal of broken down or accident  vehicles on the way after 24hours, impound defaulting vehicles found parked in unauthorized zones, collect stipulated amounts of money from owners of impounded vehicles, as  enshrined in the by-law. Defining their scope of operation, he listed the no parking zones in the local government to include; Abraka road between Convent and Ojekpolor, Hausa Street, between Convent and Ojekpolor, Ugbaja Street, between Old Lagos/Asaba Road and Ojekpolor Junction and Convent Street between Abraka Road/Osien Street, respectively, and they are to operate between the hours of 6am to 6pm daily.

In the same vein, the taskforce on Traffic Offences headed by Coach Lucky Sunday,   has been saddled with  the responsibility of ensuring all motorist comply with the Nigerian right hand drive policy, ensure proper compliance with the by-laws, amongst other functions. The Council Boss further disclosed that the Council has provided designated car parks situated at Buzugbe Street/Convent (former State Abatoir) in Boji-Boji, Owa so as to decongest the ever busy Old  Lagos Asaba road, Abraka Road, Convents and garage axis.

Responding on behalf of both parties, Coach Lucky Sunday thanked the Council Boss for finding them worthy of championing the revolutionary course in the local government, stating that their inauguration is an avenue to right the wrongs in the society, and not to amass wealth through extortion and intimidation of the public, even as he called on the residents to co-operate and comply with them.

Taking a tour round the garage axis and the designated car park after the inauguration, Hon. Ebonka frowned at the impunity displayed by motorists and shop owners who congest the roads by parking on walk ways saying that such occurrences under his watch is now a thing of the past.